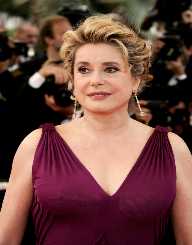 Catherine Fabienne Dorleac known on set as Catherine Deneuve is a multiple French award-winning actress and producer. Born on October 22, 1943, she also adds up as a singer and model. Her dominance in the movie industry was due to nothing but her real talent and ability to play the character as if it was herself. Making a film debut in 1957, she gradually rose to fame with films like The Umbrella of Cherbourg, The Last Metro, Indochine and Repulsion which brought her to the peak of her career.

Catherine Deneuve replaced Mireille Mathieu as the face of Marianne, France’s national symbol of Liberty in 1985. As she grew in fame and popularity, she was also known for her support of liberal causes. She has won several career awards, including Cesar Award. Catherine Deneuve has not been only active in acting but also had modeled for brands like Louis Vuitton, LOreal Paris, and Playboy.

Catherine Deneuve on October 22, 1943, in Paris, to stage actor Maurice Dorleac and Renee Simonot. She has three of which two were also involved in acting intermittently. Catherine Deneuve is coming from an acting family also got involved making a debut at a young age.

Catherine Deneuvemade a film debut at a young age of 13 in 1957. Her first film role was in Les Collegienneswhere she played alongside her younger sister Sylvie Dorleac. Three years on, she had another role inLes Portes claquentand with an impressive role played she was noticed by Jacquer Deny who would later feature her in the musical Les Parapluies de Cherbourg in 1964. As if by luck, the films projected Deneuve to fame which gained several other roles in films likeÇa c'est la vie, Vice and Virtue, Portuguese Vacation, The Umbrellas of Cherbourg ad Male Companion among several others.

She never relented on her efforts and continued to play roles the classic horror Repulsion, 1965 and others like Belle de Jour in 1967 and getting to a career height with Tristana in 1970, a film directed by Luis Bunuel. Acting basically in Europeshewould later play roles in American films like a Pregnant Man, 1973, The April Fools, 1969 and Husler, 1975.

Catherine Deneuve played other actives roles in several films and made it big with her role in Indochine in 1992. The movie was very significant in her career because it was the only one which brought her close to winning an Academy Award. She had previously won a Cesar Award for Best Actress with the film Le Dernier metro, and Indochine gave her the second Cesar Award. Being successful as an actress she went into production and released the film Droled’endroit pour unerencontre.

Her prolific acting skills continued to gain her prominence and roles in other movies like Ma saisonpreferee, Est-Oust, Pola X, Le Vent delanuit and Belle maman. He had also appeared in the music video of Joe Cocker’s song N’Oubliez Jamais in 1997. With her display in Place Vendome, she was given a Volpi Cup at the Venice Film Festival.

In 2001 Catherine Deneuve broke the york of acting in Europe to starred in Hollywood film The Musketeer. It was a long time since her American movie role in Hustler in 1975.

According to the Catherine Deneuve, The Umbrellas of Cherbourg is the best film she ever did even though Indochine and others won her an award. Her most recent works include Potiche, 2010, Les Bien-aimes, 2012 and On My Way in 2014. She published her diary A l'ombre de moi-meme in 2005. It talks about her role in Indochine and Dancer in the Dark.

Catherine Deneuve was not just a talented actress but also had a bite in the modeling industry. She modeled in two Playboy pictorials appearing nude in 1963 and 1965. From 1985 to 1989 she was used as the national symbol of France representing Marianne. Catherine Deneuve was also served as the face for No. 5 in the 1970s and the American Home Products cosmetic line in 1983.

Catherine Deneuve continued to model for comestic and other clothing lines becoming the model of Yves Saint Laurent skincare line and also became the face of LOreal Paris in2001 and also worked with Louis Vuitton in 2007 for their luggage advertisement. She was among the fifty best-dressed over the 50s compiled by Guardian in 2013.

Catherine Deneuve donated all her rights from in representing Marianne in 1985 to 1989 to Amnesty International. On her behalf, Louis Vuitton donated to The Climate Project, and she also served as UNESCO Goodwill Ambassador for Safeguarding of the Film Heritage from 1994 to 2003. Catherine Deneuve has been active in the fight against AIDS and cancer through charities. She has been involved in activities of Reporters Without Borders, Children Action, OrphelinsReumains, and Children of African. Others include Douleur sans frontiers in 2003 where she recorded a radio commercial to solicit for funds in fighting against the pain in the world especially for victims of landmines.

Catherine Deneuve was married in1965 to photographer David Bailey and divorced in 1972. She had two children from different fathers. The first child actor Christian Vadim was born from her relationship with Roger Vadim and also actress Chiara Mastroianni with Marcello Mastroianni. She was multi-lingual and could speak French, English, German and Italian. She loved to read, garden, visit the cinema and listen to music. As an entrepreneur, she came out with her own perfume, Deneuve in 1986 and topped it with her designs of glasses, jewelry, shoes, and cards.