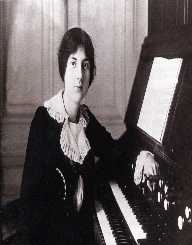 Germaine Tailleferre was born 19th April 1892, to Arthur and Marie Taillefesse. She was born in France, in suburban Paris. Her mother was in love with a man that her father didn’t approve of, and he forced Tailleferre’s mother into a marriage with Arthur Taillefesse. The marriage was a very unhappy one.

Germaine Tailleferre studied piano at home with her mother and was soon composing her own short works. She then began formal study at the Paris Conservatory. It was around this time that she changed her name, due to her father’s indifference to her musical studies.

1918, Germaine Tailleferre was asked to join Nouveaux Jeunes. This was a group of young composers. They wrote a series of short works for Caroline Tardieu, who was Assistant Professor of Harp at the Conservatory. The group became known as the Les Six.

Germaine Tailleferre immersed herself in the artistic districts of Montparnasse and Montmartre in Paris. Les Six became very well-known, and being the only female member, Tailleferre even more so.

Tailleferre’s most productive period was the 1920s, during which she wrote most of her well-known pieces. Her works during this period included several works for different ballets that were performing at the time, and also film scores.

She continued her writing into the 1930s, with more film scores and music for documentaries, as well as doing music for operas.

When World War II started, Germaine Tailleferre fled France, leaving most of her music behind. She sailed to the United States and lived in Philadelphia during the war years. In 1946 she returned to France and resumed her writing. She wrote for different ballets, including the Royal Ballet of Copenhagen, operas, and musicals.

In 1976, Germaine Tailleferre accepted an appointment in Paris at a private school. She was the accompanist for a music and movement class for children.

Tailleferre continued to compose up until her death in 1983.

Germaine Tailleferre had a daughter in 1931, and the following year she married Jean Lageat, a French lawyer, and father of her daughter. The couple divorced in 1955.

Despite opposition from her father and a total lack of appreciation and understanding from both of her husbands, Tailleferre continued with her music. The world will now have her music for generations to come.