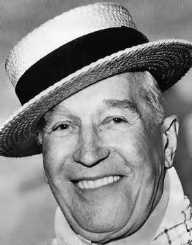 An injury meant that Maurice Chevalier had to stop doing acrobatic work, so he started singing in cafes around Paris. As time went by, he added mime and skits to his act. Around this time, he was spotted by someone who worked in the theatre industry in Paris who advised him to audition for musicals. By 1909, he was working with Mistinguette, a former Folies-Bergere dancer and they found local fame with their act.

When WWI broke out in 1914, he joined the French Army. Not long afterward he was wounded and sent to a German prisoner of war camp. A positive outcome of this experience was he spent his time learning the English language from other prisoners. He also heard about the jazz, blues and ragtime music emerging from the US.

He received the Croix de Guerre after the war.

After his wartime release from the prisoner of war camp in Germany, Maurice Chevalier started working in Paris again. In 1917, he starred in a show at the Le Casino de Paris, a musical hall in Paris. He was soon making a name for himself, and this encouraged him to work in other countries. His first overseas job was in London where he sang French songs at the Palace Theatre.

A breakthrough came when he appeared in the Gershwin and Berlin musical, Dede on Broadway. By 1929 he was in Hollywood, and his first film was Innocents of Paris (1929) which was successful. His next film, The Love Parade (1929) was Ernst Lubitsch’s first sound film. Jeanette MacDonald made her debut opposite Chevalier in this his second Hollywood film. There was speculation as to the relationship between Chevalier and MacDonald. The depression era audiences loved Chevalier’s next film, The Big Pond (1930), his second film with Jeanette MacDonald. At the time of shooting The Big Pond, a French version entitled, La Grande Mer, was being shot as well, with Chevalier in the title role of the French version as well. It featured one of Chevalier’s best-loved songs; You Brought a New Kind of Love to Me. Chevalier was nominated for an Academy Award for best actor but did not win. The Big Pond also featured his hit song Livin in the Sunlight, Lovin in the Moonlight. His third film with MacDonald was Love Me Tonight (1932). Love Me Tonight is considered one of the best musicals of the 1930s. It included the songs Mimi and Isn’t It Romance.

Director Lubitsch then decided to do a remake of The Marriage Circle, a silent movie he had directed in 1924. Again, Chevalier starred opposite MacDonald. The film was renamed One Hour With You (1932), and the romantic-comedy received an Oscar nomination. Chevalier sang Oh That Mitzi in the film.

Maurice Chevalier had become a Hollywood success story but left Hollywood abruptly in 1935 and returned to France. In France, he became enormously popular with his cabaret shows, by this time using his trademark straw boater, bow-tie, and cane. He also appeared in some films. Then World War II broke out in 1939 and Maurice Chevalier was concerned about in performing Nazi-occupied areas. He did one show in Germany in 1941 which had a caveat that certain French prisoners of war be released. This is what led to charges of Nazi collaboration against him. After the war, he was charged and found not guilty. He took his stage show to London but was denied re-entry to the US for a few years. This was because he was on a watch list due to his anti-nuclear stance.

In the late fifties, Maurice Chevalier returned to Hollywood and appeared in Love in the Afternoon (1957). And he starred in Gigi (1958) in which he sang what was to be a mega-hit for him, Thank Heaven for Little Girls. He starred with Frank Sinatra in Can-Can (1960). Then he appeared in Fanny (1961), this film was nominated for an Academy Award for Best Picture. Chevalier’s last Hollywood film was Monkey’s Go Home where he played the role of Father Sylvain.

In 1957 Maurice Chevalier was presented with The George Eastman Award for his work in film. Then in 1959, he won an Academy Honorary Award for his contribution to the film industry; special mention was made of Gigi. In 1962, he was nominated for the Golden Globe: Best Actor - Drama for Fanny (1961); the same year he won the Cecil B. DeMille for Fanny (1961). He was nominated for Best Actor in a Leading Role twice in 1930. Once for The Big Pond (1930) and the other for The Love Parade (1929).

He received a Grammy Award nomination in 1971, in the best Best Recording for Children category, for the soundtrack of Aristocats.

Maurice Chevalier signed the anti-nuclear Stockholm Appeal in 1951 and was put on a watch list by the US State Department.

He sang the title song in the animated Disney film, The Aristocats (1970)

Ranker.com list his five best films like Love Me Tonight, Fanny, The Smiling Lieutenant and Can-Can. Many of his songs such as Thank Heavens for Little Girls and Louise have endured.

Maurice Chevalier was suspected of collaborating with the Nazis during the occupation of France. He was put on trial and subsequently acquitted.