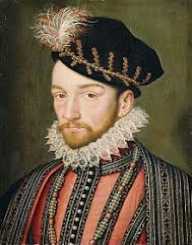 Charles Maximilian was born on June 27, 1550, in the chateau of Saint-Germain-en-Laye. His father was French King Henry II, and his mother was Italian noblewoman and French Queen Catherine de Medici. At birth, he received the titles Duke of Orleans and Duke of Angouleme. He had two elder brothers, two elder sisters, two younger brothers, and three younger sisters. He studied under governor Claude d’Urfe and governess Francoise d’Humieres.

Charles’s father passed away in 1559, making his eldest brother Francis king. Francis died just a year later. His second eldest brother, Louis, had already passed away during his childhood. This made Charles the heir to the throne. He was proclaimed king in 1560 when he was just ten years old. Because of his young age, the Privy Council made his mother Queen regent, so that she could rule in his name.

In 1563, Charles finally came of age and took over the throne. Still, his mother continued to influence his decisions. The following year, the two of them embarked on a grand tour of France. He soon issued the Edict of Roussillon, setting January 1 as the first day of the year.

In 1567, war broke out again between the Protestant Huguenots and the Catholic Guises. In 1570, Charles IX led both parties to sign the Peace Treaty of Saint-Germain-en-Laye. In 1572, his sister Margaret married Prince Henry of Navarre.

During their wedding, violence broke out once again between the Protestants and the Catholics. The chaos spread all over Paris, killing thousands of victims. The event later became known as St Bartholomew’s Day massacre. In 1573, Charles IX signed the Edict of Boulogne, ending the fourth phase of the French Wars of Religion.

In 1570, Charles IX married Elisabeth of Austria, the daughter of Holy Roman Emperor Maximilian II. In 1572, they had a daughter, named Marie Elisabeth of Valois. The following year, Charles and his mistress, Marie Touchet, had an illegitimate son. His name was Charles, and he received the title Duke of Angouleme.

Charles IX suffered from tuberculosis. He passed away on May 30, 1574, in the commune of Vincennes. He was 23 years old. After his death, his mother briefly served as Queen regent. The throne was then taken over by his younger brother, Henry III.

Charles IX appeared as a character in Alexandre Dumas’s 1845 novel Queen Margot, as well as in the novel’s 1994 film adaptation. He also appeared in the 2013 TV show Reign, Agostino di Bondeno’s 2018 novel Poissy Talks, and in an episode of Doctor Who.