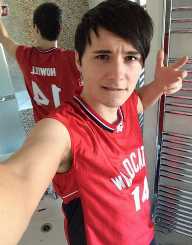 Daniel Howell is a British video blogger and radio personality. He is famous for his You Tube channel Daniel Howell originally called danisnotonfire. It has over six million subscribers.

His fans are addressed as ‘Danosaurus’ or ‘Llamaarmy’ (because of his love for Llamas and his famous Llama hat). Daniel is also famous for his show Dan and Phil on BBC Radio 1 which is in collaboration with his friend Phil Lester.

Daniel James Howell was born on 11 June 1991 in Wokingham, Berkshire, England. His star sign was Gemini. His father worked in a departmental store, and his mother managed a beauty parlor.

At the age of 16, he began working at retail chains Focus DIY and later at the supermarket Asda.  He attended the Forest School and later at the University in of Manchester in 2010 to study law. He dropped out after his success as a video blogger.

The first video uploaded was ‘Hello Internet’ on 16 Oct 2009. He received a lot of positive feedbacks and was encouraged by Phil Lester and his other friends to continue uploading regularly.  His channel danisnotonfire has over 6 million subscribers. Daniel won the YouTube competition Supernote in 2012 and became the Internet cult leader.

Daniel James Howell and Lester also started new gaming You Tube channel DanandPhilGAMES on 12 Sep 2014. The channel hit 1 million subscribers on 8 Mar 2015 and was officially the fastest growing channel on You Tube.

On 1 Apr 2015 as an April fool’s joke Dan and Phil launched DanandPhilCRAFTS a spin-off of the channel. It was a joke tutorial about creating ‘Square Snowflakes’ out of paper.

The channel won the You Tube Silver Button Award in summer 2015. The phrase “Don’t cry, craft” became a popular internet meme from that video. The popularity drove them to upload two more joke tutorial videos, ‘Making Glitter Faces’ on 1Apr 2016 and ‘Potato Prints’ in 2017.

This show won the Sony Golden Headphones Award in four months. Howell and Lester also presented the Teen Awards in 2013 and 2014.

They later moved to a different show ‘The Internet Takeover’ from Sep 14 to Apr 16. This show featured other video bloggers and was presented on the first Monday of every month.

In 2010 and 2011 they took part in ‘Stickaid’ a live Annual 24 hour internet broadcast to raise funds for charity in association with UNICEF.

Dan and Phil lent their voices for Disney’s animated film ‘Big Hero 6’ (2015) in the UK Cinema release. They also voiced ‘The Last Gorilla’ in Disney Juniors’ The Lion Guard in Dec 2016.

They also had a theatrical stage show ‘The Amazing Tour is Not on Fire’ (TATINOF)which traveled around the UK during Oct and Nov 2015 ending at London Palladium. On Apr 16 they took the tour to the US starting at Playlist Live in Orlando, Florida and ended at Dolby in Hollywood in California.

They also toured to Australia in Aug 2016 starting at Perth and ending at Brisbane. A film titled The Amazing Tour is Not on Fire was released through YouTube Red. On Nov 16 a photo book titled Dan and Phil go outside was released with photos of their tour.