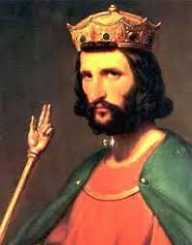 Hugh Capet was the king of France born in 938 and died in 996. He held the position from 987 till his death and was succeeded by his son. The third Frankish royal dynasty which he founded ended up ruling France for a long time till 1328. He succeeded his father Hugh the Great in 958 when he became the Duke of the Franks. He was later crowned King in 987 in Noyon. However, his 40-year rule was met with many challenges. Luckily for him, his enemies were always in disagreement. That is how he managed to remain in power.

Hugh Capet was born in 938 in Paris, France to Hugh the Great and his wife Hedwige Liudolfing. His mother was the daughter of Henry the Fowler, the German king. His family had ties to many royals, making them well-connected. His grandfather was King Robert I.

Capet became king of France in May 987 after the assembly of Frankish elected him. Thereafter, on July 5, he was crowned. Not everyone was happy about his new position as king. The likes of Charles of Lorraine constantly tried to assert himself but without any success. He was imprisoned in 991.

In December 987, Capet arranged for the coronation of his only son Robert. This enabled Robert to have a smooth succession of the throne when his father passed on. It was the practice of crowning heirs that led to the stability of French dynasties for a long time.

Hugh Carpet was married in 970 to Adelaide. Their children were Robert II, Gisela, and Hedwig (also called Hathui).

Hugh Capet died in 996 in Paris, France. At the time, he is thought to have been either 57 or 58 years old. Robert his son succeeded him.