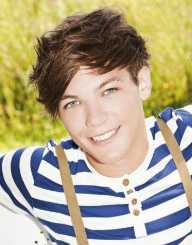 William Tomlinson is one of the English Pop singers who was also one of the members of One Direction. He is a very young and dynamic performer that is so much loved by millions of teenage girls across the globe. He is very popular in his native England home. He is also known to have been exposed to show business at a very tender age. At the age of 11, his baby sisters landed minor roles on the television comedy Fat Friends, and he accompanied them to set. He was however cast as an extra. This excited him so much that he began taking so acting lessons and began appearing in television dramas.

Louis Tomlinson found his true love in singing and songwriting. Throughout his school days, he always made the school musical production his primary assignment without much focus on his academics. He auditioned for a singing competition, The X Factor in 2010. Although he successfully clears the initial rounds, he was eliminated in the final round. Although, the judge recognized his potentials and they team him up with other four participants, Harry Styles, Nial Horan, Liam Payne and Zayn Malik. Together, they formed One Direction and got signed to Simon Cowell’s music label. They were successful as a group.

Louis Tomlinson was born to Johannah Poulston and Troy Austin in Doncaster, South Yorkshire, England. However, his parents got separated while he was young and his mother remarried Mark Tomlinson. He thus took his stepfather’s surname instead of his dad’s. He had studied at Hayfield School before he moved to Hall Cross School.

He was not so much inclined towards academics as he loved singing, acting and always found himself in the school musical productions. Louis Tomlinson also took acting lessons after being fascinated by writing at a very young age. He played the lead role of Danny Zuko in one of the Hall Cross Musical Production of Grease. He had the chance to play a small part of the television drama If I had You and Waterloo Road as a child.

Louis Tomlinson auditioned for the popular television talent competition The X Factor in 2009 but was turned down. He later tried his luck in 2010 with the same competition. He became successful and cleared all the rounds before he was eliminated in the finals. However, upon seeing potential in him, the judge united him with some other competitors, Harry Styles, Nail Horan, Liam Payne and Zayn Malik from a group act. This group was later called the One Direction, and they finished the competition in third place. At the end of the competition, they signed a deal with Simon Cowell who recognized the potentials of the group.

LIFE IN ONE DIRECTION

So much happened in One Direction as they enjoyed a wide range of success. Their first single was What Makes You Beautiful and was released in the UK. It became the No. 1 hit. However, their debut hit was the Up All Night album which was released in the UK. This album was later released and accepted all over the world. It became an establishment to the boys as international youth icons.

In 2012, they released another album Take Me Home, and this album revolved around the themes of unrequited love. It was the fourth best-selling album of 2012 and topped the charts in more than 35 countries. Much enthusiasm was input to the release of their album in 2013 and 2014 was a success for them. They released the album Four, My Girl and Night Changes which earned them platinum status in the United States. However, they faced a great shake off after Zayn Malik departed and the announcement was made as to the released of them to pursue their careers.

Most of his works are done with his band One Direction. However, the albums that could be regarded as his major works are the band’s Four which debuted at No. 1 in 18 countries including UK, Australia, US, Denmark among others. Take Me Home could also be referred to as one of his major works due to the success that follows it.

Louis Tomlinson has dated several ladies. He once dated Elanor Calder, a student for almost four years before breaking up with her. However, in mid-2015, it was reported that he is expecting a baby with Briana Jungwirth, an American stylist.