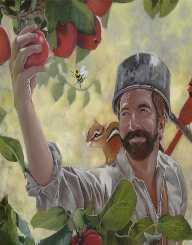 Johnny Appleseed was an early American nursery farmer who is famous for the cultivation of apple seedlings and their introduction to planters across America.

Johnny Appleseed was born in Leominster, Massachusetts as John Chapman on September 26, 1774. He acquired the name Johnny Appleseed after his exploits in the distribution of apple trees seedlings in the US. The second son of Nathaniel and Elizabeth Chapman, Appleseed was a child of war. He was born in the decisive moments of the American Revolutionary War against Britain. His father fought for the American army during the war. In July 1776, Elizabeth Chapman lost her life during the birth of Johnny. Nathaniel returned from the war, found his wife buried and remarried later. Nathaniel fathered 10 children in his second marriage.

Though born during a major war, Johnny never joined the military. He engaged in farming from an early age. Much of early youth life is concealed in unrecorded history. In 1805 at the age of 30, he returned back to Massachusetts from Ohio. He continued with the cultivation of various nurseries. His father noticed his interest in seedling farming and supported him. He took him for an apprenticeship with a successful local orchard farmer. Johnny decided to be an apple orchardist.

Traveling as a missionary in parts of America, he introduced the apple seeds in all the places he visited. Johnny showed his hosts and their neighbors on the establishment of nursery beds for future use. He left them at the care of the locals at a small fee. He constantly visited the established nurseries to evaluate their progress. He encouraged the successful farmers to teach the locals the nursery farming. On the other hand, taught the nursery construction again for the unsuccessful farmers. John Chapman acquired his nickname Johnny Appleseed.

Johnny created his first nursery in Brokenstraw Creek, Pennsylvania. He went along the French Creek and established more nursery beds. He concentrated his beds along the river banks or creeks in Ohio. He extensively worked around the towns of Lucas, Lisbon, and Loudonville. Johnny sold the orchard seedlings after a year of nurturing them.

Though most of the apple varieties are edible, Johnny cultivated most of his varieties for liquor production. Liquor houses used his apples as raw materials in brewing Cider and Applejack. Cider proved the popular alcoholic drink since it was cheaper than beer and whiskey. Thus, his produce had a ready market. With over 1,200 acres of planted trees, Johnny became a financially secure farmer. As he traveled, he carried his trade with him. He ended up covering large tracks of land in the Ohio, Illinois, and Pennsylvania and as far as Ontario in Canada.

As a traveling missionary, Johnny labored to evangelize the masses of the teachings of the New Church. He became popular among children for his ability to converse and play in the orchards with them. He traveled through the Native American tribes with ease. He befriended the Natives and introduced the new plants to them. To the locals, he became a welcomed guest. He used the goodwill gesture to preach about Christianity. In the end, Johnny converted them into apple farmers and Christians.

He lived as a hermit all through his life. He traveled with as a loner with few material belongings despite his immense wealth. His entire wardrobe had a few tattered clothes and a tin hat. He never wore shoes. Johnny believed in chastity. In doing so, he never married and hoped his chastity was his ticket to heaven. As such, he became a subject of the mid-American folklore.

Various versions of his life came up according to the area he visited. Some stories said he had a soft spot for insects and animals. He became a practicing vegetarian in his life to avoid cruelty to animals. Though he was a self-declared animal rights activist, he never became an animal farmer in his life. Some said he befriended a pet wolf during his Native Indian territory escapades. The wolf allegedly protected him from any dangers along the traveling route.

As in his life, Johnny became a subject of controversy even in his death. Since there is no legal proof of the exact date of his death, historians still debate on this. Some suggestions report his death as 1847, but popular reliable sources put his death as in March 1845. His grave also became a subject of debate until it was agreed that he was buried in a park bearing his name in Fort Wayne.

Since he never had a family, Johnny left his entire estate of orchards and nurseries to his sister. In 1837, the Americans suffered a financial crisis. The purchasing power of most Americans disappeared. The price of the nursery seedlings plummeted to 3 cents per seedling. His sister gradually started incurring losses in the trade. Johnny left little legal documentation on the ownership of the land. His sister lost all the land to taxation and other legal issues.