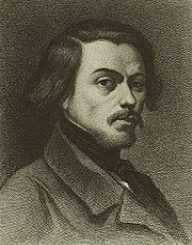 Eugene Delacroix was a famous 19th-century painter. Among many of his famous works, he is best known for Romantic-era painting “Liberty Leading the People.”

Eugene Delacroix was born on April 26, 1798, at Charenton-Saint Maurice in Ile-de-France. His full name was Ferdinand-Eugene-Victor Delacroix. Eugene Delacroix was raised by Charles-Francois Delacroix and Victoire Oeben. It is believed that his biological father was Charles Maurice de Talleyrand-Perigord, a family friend.

Talleyrand was Delacroix's artistic patron through the course of his career as a painter. The elder Delacroix was a Minister of Foreign Affairs until his death in 1805. Delacroix's mother encouraged her son's education in the arts and literature. When she died in 1814, Delacroix became an orphan.

Eugene Delacroix first attended Lycee Louis-le-Grand in Paris. Later he attended Lycee Pierre Corneille in Rouen. While in school he continued the interest of art and literature that his mother encouraged.

Eugene Delacroix was honored with awards for his drawings during that period. Later he focused his studies in art. In 1815 he was a student of Pierre-Narcisse Guerin in the neoclassical style of Jacques-Louis David. He earned a place at the prestigious Parisian school Ecole des Beaux-Arts in 1816.

Delacroix's love for literature and history gave him plenty of inspiration for his works. His first exhibited painting was “Dante and Virgil in Hell.” He created lithographs from plays by Goethe and Shakespeare. His later works focused on the Greek War of Independence with titles such as “The Massacre at Chios” and “Greece on the Ruins of Missolonghi.”

Eugene Delacroix was in demand for his work during the Romantic era. He was one of the fortunate who could find clients to the commission or buy his work. Eugene Delacroix used the painting “Liberty Leading the People” as a political poster for the 1830 Revolution. He included himself in the painting as he was a member of the National Guard. It is one of the first politically-themed works of modern painting. The French government bought the painting in 1831. Traveling also inspired Delacroix. In 1825, he traveled to England to see the subject matter of English landscaping paintings. He was able to learn from some of the great English painters of that time such as Joseph Mallord William Turner and Thomas Lawrence. Another trip that inspired Delacroix was to Morocco in 1832.

The difference in culture and lifestyle influenced his later works. Some works included “Jewish Wedding in Morocco,” “Women of Algiers in Their Apartment,” and “Arab Saddling his Horse.” It was 1833 when Delacroix worked on larger assignments. He was commissioned to paint murals at the Library at the Palais du Luxembourg and Library at the Palais Bourbon. He also painted the ceiling of “Galerie d'Apollon” of the Louvre.

By the 1840s, Eugene Delacroix spent most of his time in the French countryside outside of Paris. There he continued his artwork including flower still lifes. His last commissioned assignment was for the Church of Saint-Sulpice. It was a set of murals including “Jacob Wrestling with the Angel.”

Delacroix's work is recognized for its use of bold colors and vibrant brushstrokes. He was able to show the emotion, conflict, and violence that came with the events that he painted. Some critics thought his work was a bit too gruesome. One example would be “Death of Sardanapalus” that portrayed the king before his suicide.

Eugene Delacroix was a member of the Société Nationale des Beaux-Arts. It was formed in 1862. They exhibited a retrospective collection of Delacroix's work after his death.