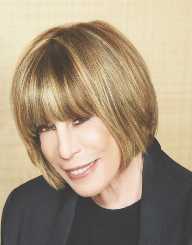 Cynthia Weil is an American songwriter. She is known for hit songs for The Ronettes, Lionel Richie, and numerous movie soundtracks.

Cynthia Weil was born on October 18, 1940, in New York City, New York. Her father Morris was a furniture store owner.

Cynthia Weil started her training in dance and acting but pursued songwriting.  She began with Frank Loesser's music publishing company but later worked with Aldon Music. Aldon is connected to many musical hits of the 1960s. She became one of the “Brill Building Writers” which included other notable songwriters of the time such as Carole King, Gerry Goffin, Phil Spector, and Neil Sedaka.

Cynthia Weil and her husband Barry Mann wrote many songs together as they collaborated with others in the business including Phil Spector.  Together they wrote, “You've Lost That Lovin' Feeling.”

She is also connected with some movie soundtracks. She earned her first Grammy nomination with the songwriting team for St. Elmo's Fire in 1985. In 1988, she and her husband along with James Horner won 2 Grammys for “Somewhere Out There” for the animated film An American Tale.

They won in the categories of Best Song Written Specifically for a Motion Picture and Song of the Year. The song was also nominated for an Oscar. The trio also earned a Grammy nomination for “Whatever You Imagine” from The Pagemaster in 1996.

Cynthia Weil started writing more than just songs in her later years. In 2006, she wrote the screenplay for the original pop-rock musical Mask. In 2015 she published her first young adult mystery novel titled I'm Glad I Did and 806: A Novel in 2018. Weil and her husband are still active. They are part of the musical “Beautiful The Carole King Story” which is touring worldwide.

Cynthia Weil legacy comes with the song lyrics that she writes alongside the melodies of her frequent collaborator, Barry Mann. Her music has been relevant for over four decades.

She married her husband Barry Mann in August of 1961. They have one child, Jenn, who is known as the psychotherapist Dr. Jenn Berman.

Inducted into the Songwriters Hall of Fame along with Barry Mann, 1987, 2 Grammys, including Song of the Year, “Somewhere Out There,” 1987, Top Song of the Century, BMI Music, “You've Lost That Lovin' Feeling,” 1999

“Walking in the Rain” for the Ronettes, “On Broadway” for The Drifters, “You've Lost that Lovin' Feeling” for the Righteous Brothers, “Running with the Night” with Lionel Ritchie, “Somewhere Out There” for An American Tale soundtrack, “They Wrote That?” Broadway Revue