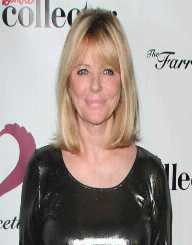 High-profile glamorous all American model and fashion designer Cheryl Rae Tiegs was born on September 25, 1947, in Breckenridge, Minnesota, the United States of America to Theodore and Phyllis Tiegs. Her father worked as an auto-assembly lineman before becoming a mortician.

Cheryl Rae Tiegs family moved to the sunny Los Angeles suburb of Alhambra, California in 1952 when she was only five years old. She studied at the local Alhambra High School. In her teenage years, she successfully auditioned and appeared in a few television commercials. When she was in her senior year, bathing suit manufacturing company Cole of California used her in their advertisement of swimsuit.

The advertisement appeared in the American teen magazine ‘Seventeen’. She enrolled herself at the California State University, Los Angeles for pursuing an English major. However, she abandoned her studies and left the college even before completion of her junior year to pursue a career in modeling, which was her priority.

Cheryl Rae Tiegs plunged herself into the modeling world early in her life. The editorial staff of the women’s magazine ‘Glamour’ was so impressed with Cheryl’s swimsuit ad of Cole of California, that they straightway called her for a photoshoot in the virgin Caribbean island of Saint Thomas along with another American model Ali MacGraw bypassing the customary in-person meeting formalities.

In 1978, she appeared on the cover of the Sports Illustrated Swimsuit issue draped in a fishnet swimsuit. The pristine white swimsuit embodied her quintessential combination of the image of a girl-next-door with her natural sensuality. The cover made her a raging sensation which opened the doors of opportunities galore for her.

Soon, she was featured on the cover of the Time magazine and signed a lucrative $1.5 million deal with Cover Girl cosmetics, the biggest contract ever at that point of time.

Cheryl other important assignments include appearing four times on the cover of ‘People’, an American weekly magazine of celebrities and human interest stories and a three-time appearance on the cover of ‘Time’ magazine including the celebrated ‘All American Model’  Cover Story issue of 1978. Cheryl was inducted into the Hall of Fame in the 40th anniversary of the swimsuit issue of Sports Illustrated.

Cheryl was also featured prominently among the 50 Most Beautiful People list furnished in the People’s magazine in 1978. In 2012, Men’s Health Magazine included her in the list of ‘100 Hottest Women of All Time’.

In 1978, Cheryl got acquainted with photographer Peter Beard in New York. They conducted a joint photographic expedition in the following year and traveled to Kenya for the purpose.

During the expedition, they investigated the management and widespread destruction of wildlife in the continent of Africa and later documented their findings in the Emmy Award-winning episode of ABC - TV’s sports special ‘The American Sportsman’ titled ‘Africa: End of the Game’ in 1979. In the same year, LOOK magazine published a cover story on her titled ‘Cheryl Tiegs: The New African Queen’. In 1980, she was featured on the cover of the ‘Outside’ magazine.

Cheryl Rae Tiegs began a new career in fashion designing in 1980 with the launching of a signature line of clothing and accessories on behalf of the American chain of department stores Sears, Roebuck, and Company popularly known as Sears.

This was the first of a kind of move by a contemporary supermodel and was successful in collecting nearly a billion dollars from the sale proceeds by the year 1989. The charismatic personality of Cheryl helped Sears revive its fortune in the first year itself of their association.

The Time magazine once again featured Cheryl on their cover with the cover story titled ‘Sassy Sears’, crediting her for the turnaround in the retail chain’s fortune. A doll was created imitating her features in 1990 under a project titled ‘Real Model Collection’ which also includes dolls of the likes of Christie Brinkley and Beverly Johnson. She founded ‘Cheryl Tiegs Sportswear’.

in 1995 which was sold exclusively on QVC, the American cable, satellite, and broadcast television network. Working in collaboration with Revlon, the American multinational cosmetics, fragrance, personal and Skin Care Company, she launched an array of hair accessories and a line of wigs.

Cheryl was one among the contestants of the American reality television series ‘Celebrity Apprentice’. She donated her participating fees from the contest to the Farrah Fawcett Foundation.

Cheryl pursued her acting career as well. In 1986, she made her small screen debut in ABC’s comedy-drama ‘Moonlighting’. In 1995, she appeared as Lola Valenti in an episode of NBC’s ‘The John Larroquette Show’.

Cheryl also made some guest appearances in television programmes such as ‘Just Shoot Me!’(2000-2002) aired by NBC TV and in the web series ‘Children’s Hospital’ (2015). She made her big screen debut in 2003 in an American independent art house drama film ‘The Brown Bunny’. She played the role of the mother of the male protagonist in the 2016 comedy-horror film ‘Sharknado 4: The 4th Awakens’.

Defying her age, Cheryl posed in a bikini at the age of 54 for the cover of ‘More’ magazine during the year 2001 and was admired profusely for such a bold step.

Cheryl Rae Tiegs l tied the nuptial knot four times in her life. Her first husband was Stan Dragoti, an advertisement executive. The marriage was solemnized on July 1970 and lasted until 1981.

They together have one son, Zachary. On May 30, 1998, Cheryl Rae Tiegs got hitched for the fourth time and married yoga instructor Rod Stryker. In July 2000, they became proud parents of their twin sons, Jaden, and Reid via surrogacy. The couple finally divorced on October 8, 2001.