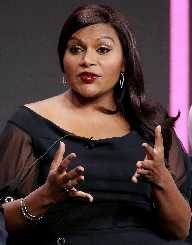 Mindy Kaling was born on June 24, 1979, in Cambridge, Massachusetts, USA. Her parents are Swati Roysircar and Avy Chokalingam. She also has a brother named Vijay Chokalingam.

As a young adult, Mindy Kaling attended Dartmouth College. While there, she was a part of an improv troupe, the Dog Day Players. This helped her to express her acting skills early on. Also while in college, she dabbled in art, making up her own comics called Badly Drawn Girl.

Mindy Kaling’s acting career only began recently, in 2005. She first appeared as a small character, Amy, in The 40-Year-Old Virgin. Later on, in this same year, she began acting in The Office, a workplace comedy. This show and based off of a British television comedy with the same name. Mindy Kaling played a spunky woman craving a workplace romance-- Kelly Kapoor. She held this role throughout all nine seasons of the show. She was highly involved with this show, and it is one of her works that she is best known from. Apart from acting on the show, she also worked as a consulting producer, co-executive producer, executive producer, and producer for over 100 episodes in total.

When not working on The Office, Mindy Kaling worked on several other films, mostly in small parts. Some of the other films and shows she worked on include License to Wed, Night at the Museum: Battle of the Smithsonian, Curb Your Enthusiasm, Despicable Me (voice role), No Strings Attached, and Wreck-It Ralph (voice role).

In 2012, Mindy Kaling began acting in a new show, The Mindy Project, where she plays Mindy Lahiri. Since the beginning of this show, Kaling has been the executive producer of the show. This show follows the life of a doctor and all of the hilarious problems she faces in both her professional and personal life. This show is still ongoing, as of 2017.

Kaling is currently working as an actress in several upcoming films and television shows, including Ocean’s Eight and A Wrinkle in Time.

Over the years, Mindy Kaling has written several books, most of which are autobiographical works. Her only non-autobiographical work is Matt & Ben, which she wrote with Brenda Withers. This book was a comedic view on the real-life story of Matt Damon and Ben Affleck writing the screenplay for the now-famous film, Good Will Hunting. This piece of work was later made into a play and was shown in cities like New York City and Los Angeles. Her other books are listed below.

Why Not Me?
Questions I Ask When I Want to Talk About Myself
Is Everyone Hanging Out Without Me?

Mindy Kaling has won several awards for her film and television career. Some of her most impressive awards are listed below.