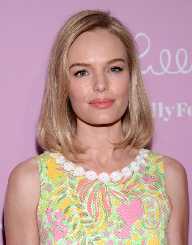 Catherine Ann “Kate” Bosworth” is actress and model best known for her role in Blue Crush in 2002. Born on January 2, 1983, she made an acting debut playing the role of Judith in The Horse Whisperer, 1988. It was followed by New Comers and Remember the Titans in 2000. Kate Bosworth had an acting breakthrough playing the role of Anne Marie Chadwick in the 2002 film Blue Crush. The role was very challenging yet fulfilling as it shot her into the limelight.

Kate Bosworth worked out for about 7 hours a day for months with two different trainers to add up 15 pounds of muscles. The movie was a box office hit grossing $40 million. She has played roles in other movies including Wonderland, 2003, Beyond the Sea, 2004, Superman Returns, 2006 and Straw Dogs in 2011. Bosworth featured in the horror film Before I Wake in 2016.

Kate Bosworth is the only child of Patricia (née Potter) and Harold Bosworth. She was born on January 2, 1983, in Los Angeles, California. Harold is a former executive of Talbots and Patricia, a homemaker. Born with heterochromia iridium, she has a blue left eye and a hazel right. Due to the nature of Harold’s work, the family relocated many times.

She spent her early life on the East Coast and her youth days in Massachusetts and Connecticut. Growing up, she developed a great interest in horse racing becoming a champion equestrian at age fourteen. In 2001, she graduated from Cohasset High School. She had admission in Princeton University but it was later revoked due to her continual non-attendance.

Kate Bosworth won the role of Judith in the film The Horse Whisperer, 1998 after an open casting call in New York. She had the role thanks to her experience in horse riding as the producers were looking for someone with such qualities.

In 2000, Kate Bosworth played the role of Bella Banks in the television series Young Americans. Bosworth played several minor roles in films like Remember the Titans. She relocated to Los Angeles in her bid to have more access to auditions and better roles.

In 2002, Kate Bosworth had a career breakthrough having a role in the surfing moving Blue Crush. She underwent intense preparation working out with two separate trainers for seven hours a day. This was to enable her to gain 15 pounds of muscle. The film was a success grossing $40 million at the box office. Kate Bosworth receives positive reviews from movie critics with Peter Travers of Rolling Stone magazine stating, "Bosworth is a star in the making, but even she can't outshine the surfing footage, which is flat-out spectacular.”

In 2010, Bosworth starred in the box office flop The Warrior's Way, alongside Geoffrey Rush and Korean actor Jang- Dong-gu. The film which cost $42 million managed to gross a little more than $11 million.

She has starred in films like Still Alice and Lov among others. Kate Bosworth became the face of Calvin Klein Jeans in January 2008. She was the Asian spokesperson for the bag brand Coach. She is the voice behind Cotton Incorporated’s Fabric of My Life advertisement jingle. Kate Bosworth along with celebrity stylist and friend Cher Coulter designed a jewelry line, JewelMint launched in 2010.

Kate Bosworth has first known the relationship was with English actor Orlando Bloom from 2003 to 2006. She then dated Swedish actor Alexander Skarsgard for two years breaking up in 2011. That same year, she started dating American film director, Michael Polish. Polish had directed her in the film Big Sur earlier that year. The couple announced being engaged in August 2012. On August 31, 2013, they were married in Philipsburg, Montana. Kate Bosworth is a member of Soka Gakkai International. She is an avid fan of Dallas Cowboys.