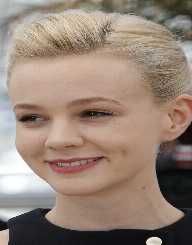 Carey Hannah Mulligan was born on May 28, 1985, in Westminster, London. She is the daughter of Stephen Mulligan, a hotel manager and Nano Mulligan, a university lecturer. Her father was of Irish descent and hailed from Liverpool. When she was three years old, her family including her elder brother Owain moved to Germany.

In Germany, the Mulligan siblings began their schooling at the International School of Düsseldorf. The Mulligan’s shifted back to England when Carey turned 8. Carey Mulligan then completed her secondary education from the Woldingham School in Surrey. At the age of six, Carey saw her brother act in a school play titled ‘The King and I.’ She was fascinated by what she saw and was subsequently bitten by the acting bug.

During her teenage years at the Woldingham School, Carey Mulligan actively participated in theater and was the student head of the Drama department. She was further inspired by Kenneth Branagh’s performance in the play ‘Henry V.’

Carey Mulligan had made up her mind to pursue a career in acting, but she faced stiff opposition from her parents who wanted her to complete her education and attend the university. Carey decided otherwise, and instead of applying at the universities suggested by her parents, she sent out applications to three drama schools in London. However, her requests remained unapproved.

Eventually, Carey Mulligan was introduced to a casting director by screenwriter Julian Fellowes, and she landed the opportunity to audition for a role in the film ‘Pride and Prejudice.’ After several rounds of auditions, Carey ultimately bagged the role of Kitty Bennet. During her early days, Carey has also worked as a pub barmaid and an errand-runner.

Carey Mulligan began her acting career at the young age of 19 with the play ‘Forty Winks.’ In 2004, the play opened at the Royal Court Theatre in London. In the following year, Carey Mulligan made her film debut with the adaptation of Jane Austen’s novel ‘Pride and Prejudice.’ In the same year, she made her television debut portraying the character of an orphan named Ada Clare in the BAFTA award-winning ‘Bleak House.’ 2007 was a noteworthy year for her as she was seen in various roles in films, television, and theater alike.

Carey Mulligan acted alongside Daniel Radcliffe in the film ‘My Boy Jack,’ won a Constellation award for essaying the role of Sally Sparrow in the Doctor Who’s episode ‘Blink’ and was critically acclaimed for her performance in ‘The Seagull.’ When she debuted on Broadway with the revival of ‘The Seagull,’ she also got nominated for a Drama Desk award but eventually lost the award to Angela Lansbury.

The milestone of Carey Mulligan’s career came at the age of 22 in the year 2009. She was cast in the leading role of Jenny in Danish filmmaker Lone Scherfig’s film ‘An Education.’ More than a 100 actresses auditioned for the film written by Nick Hornby, but it was Mulligan who managed to impress filmmaker Scherfig with her stellar performance. Both the film and Mulligan’s performance received glowing praise from audiences and critics worldwide. She was subsequently nominated for an Academy Award, a Globe Globe award, a Screen Actors Guild award and a BAFTA Rising Star award. Her performance also won her a BAFTA Award and the Shooting Stars Award.

In 2009, Carey Mulligan was seen in the independent film ‘The Greatest’ where she essayed the role of a pregnant girlfriend whose boyfriend dies. Carey was then selected to join The Academy of Motion Picture Arts and Sciences. Mulligan was the recipient of the British Independent Award for her film ‘Never Let Me Go’ which was released in September 2010.

Carey Mulligan again returned to theater with the adaptation of Ingmar Berman’s ‘Through a Glass, Darkly.’ Carey played the title role of a mentally unstable woman. Her brilliant display of acting of the highest order earned her rave reviews from many eminent personalities of the theater circuit.

In 2011, Carey Mulligan was nominated for her second BAFTA Award for Best Supporting Actress for the critically acclaimed thriller film ‘Drive.’ In the same year, she also starred in a sex-addiction drama film titled ‘Shame’ featuring actor Michael Fassbender. In May 2013, Carey Mulligan was seen opposite Hollywood’s blue-eyed boy Leonardo DiCaprio in the film ‘The Great Gatsby.’ In the same year, she was also seen opposite Oscar Isaac in the film ‘Inside Llewyn Davis.’

In 2015, Carey Mulligan acted in ‘Far From the Madding Crowd,’ a film adaptation of Thomas Hardy’s novel of the same name. She also returned to Broadway with the revival of the play ‘Skylight.’ Her extraordinary portrayal of Kyra Hollis earned her a Tony Award nomination for Best Performance by a Leading Actress in a Play. In the same year, she was seen in Sarah Gavron’s historical drama ‘Suffragette’ enacting the role of a stalwart activist. Carey Mulligan has also tried her hand at being a vocalist for the song ‘Write About Love.’ She is set to star in an upcoming independent film titled ‘Wildlife’ opposite Jake Gyllenhaal.

Carey Mulligan is a known face which spreads awareness about Alzheimer's. Her grandmother is suffering from the disease, and hence, Carey is well aware of the need for awareness of the disease. She was appointed as the brand ambassador of ‘Alzheimer's Society’ in 2012. She also raised awareness for sex trafficking by taking part in the Safe Project. Mulligan is also the brand ambassador for the War Child charity.

Carey Mulligan began dating actor Shia LaBeouf while working on the film ‘Wall Street 2: Money Never Sleeps’ in 2010. However, the two split up later, and Carey got married to her childhood penpal and the lead singer of Mumford & Sons, Marcus Mumford. The two came close during the shooting of the film ‘Inside Llewyn Davis’, and their marriage was solemnized on 21st April 2012. The couple is blessed with a daughter named Evelyn Grace Mumford who was born in the year 2015.