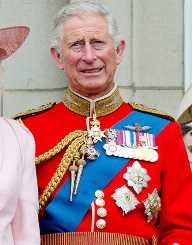 Charles, prince of Wales, was born on November 14, 1948, at the Buckingham Palace, London. For the fans of the popular HBO series, his full title is the awe-inspiring prince of Wales and earl of Chester, duke of Cornwall, duke of Rothesay, earl of Carrick and Baron Renfrew, Lord of the Isles, and Prince and Great Steward of Scotland, heir apparent to the British throne. He is the son of the current British Queen, Elizabeth II.

Ignoring the traditional practice, Prince Charles did not enjoy the privacy of tutor-led instruction. He instead entered the Hill House School in London. Later he attended several more schools, including one in Australia as an exchange student. As any student exchange program, this was a valuable experience for the young prince. He was already trusted with many responsibilities about his royal titles. In 1967, he entered Trinity College, Cambridge, to pursue a bachelor's degree in anthropology, archaeology, and history. He graduated on June 23, 1970, with the so-called 2:2 Bachelor of Arts degree. 5 years later, by the university's academic rules, his degree was promoted to Master of Arts.

Prince Charles spent his young years with a great abundance of events, as fit for royalty. He was being involved in many activities and events and was also very active on the romantic front. His investiture as Prince of Wales was approaching. That is why he spent a term at the University College of Wales and effectively studied Welsh. He was eventually invested by his mother, on July 1, 1969.

Men from the British royal family traditionally entered military training. Prince Charles did not break the custom and two years after the investiture, he attended the Royal Air Force College and later the Royal Naval College. He received an excellent military education. Following his years in the military, he became a fully-qualified helicopter pilot with practical experience in the navy.

The famous in public Diana Frances Spencer married Prince Charles On July 29, 1981. A year later, the royal couple had their first son, Prince William of Wales. Then they had another son, Prince Henry Charles Albert David. The couple had an extremely positive public standing, owing to Diana's character. In the eyes of the world, their marriage was a dream. The young princess grew more and more famous, leaving Charles in the shadow of her popular image. This and many other factors, related to their royalty, gradually wore down the couple.

The final blow to the marriage between Prince Charles and Princess Diana were the rumors of the former having an affair. The media claimed that the prince was still romantically involved with one of his former lovers. This eventually led to the divorce of the royal couple, on August 28, 1996, four years after the official separation. The loved-by-everyone princess died in a car crash the following year. These unfortunate circumstances led to the further appreciation for her, and not for Charles.

The following years Prince Charles spent in trying to revitalize his public image and help his two sons. They were both young (between the ages of 15 and 12) at the time of their mother’s death. In 2005, he married Camilla Parker Bowles. The latter is the same woman that the media supposed Charles was having an affair with. He would eventually confess that this was true. Their wedding was a civil one, rather than a church, as was the custom, but it still invited hundreds of guests and media coverage.

Prince Charles is known for his philanthropic activities, his hard-working nature and unique approach to architecture. He wrote several books on the issue, including the famous Vision of Britain (1989). He also created Prince of Wales's Institute of Architecture. He is the founder and president of more than a dozen charities and a member of hundreds more. He funded vaccines for sick children around the developing world, and was, and still is, a firm defender of human rights.