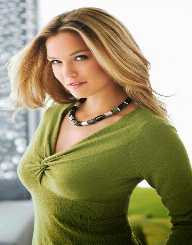 Israeli Supermodel and businesswoman Bar Refaeli was born in a secular Jewish household on June 4, 1985. Her place of birth was Hod HaSharon in Israel. She was the daughter of highly successful Israeli model Tzipi Levine and her husband, Rafi Refaeli. Refaeli’s grandparents were European immigrants. She grew up on a horse ranch owned by her parents located in the Israeli countryside.

Bar Refaeli's debut in the world of modeling happened when she was just eight months old. She started shooting for commercials right from the time she was an infant. It became evident that Bar was destined to be a supermodel in the future and her charming face with striking features would bring her considerable fortune. However, during her childhood years, she had to take a break from modeling owing to dental braces. She returned to modeling when she turned 15.


CAREER AS MODEL AND ACTRESS

A milestone in Bar Refaeli's career came in the year 2000 when she was crowned the ‘Model of the Year’ in an Israeli beauty pageant. In the same year, she signed a modeling contract with Irene Marie Models and became a prominent figure in the ad campaigns of well-known brands like Castro and Pilpel. She was also seen in a Milky pudding commercial. Renuar fashion channel made her the face of their brand, and she was featured in their summer and winter catalogs in 2002 and 2003 respectively.

Bar Refaeli made her television debut in the year 2005 with the Israeli television drama series ‘Pick Up.’ Her career as a model was gradually picking up the pace, and by the time she was 20 years old, she had carved a niche for herself in the modeling world. In 2006, she gained immense popularity with her appearances as the cover model for illustrious magazines like French Elle, Italian GQ, Maxim, and Cosmopolitan.

In 2007, Bar Refaeli added another feather to her cap by becoming the second Israeli model after Michaela Bercu to have appeared in the Sports Illustrated Magazine. In that edition of the magazine, she was seen alongside rock band Aerosmith. In the 2009 Swimsuit edition of the magazine, Refaeli appeared on the cover thereby becoming the first Israeli model to do so. In October 2008, Bar co-hosted the Bravo unique program ‘Tommy Hilfiger Presents Ironic Iconic America.’ The program was based on the book titled ‘Ironic Iconic America’ authored by George Lois.

In 2009, Bar Refaeli again donned the hat of a host for MTV’s revival of the show ‘House of Style’. In the same year, she was selected as the home model for the fashion brand Rampage, and she bagged the opportunity to work with world-renowned photographer Gilles Bensimon for the fall collection ad campaign of the brand. She also modeled for Garnier International and became their spokesmodel. In 2009, Bar was seen in commercials promoting the luxuriant Morellato watches and jewelry, and she was also appointed as the brand ambassador of Hurley and Diddy cologne.

Bar Refaeli's film debut came in 2011 with the American-Israeli psychological thriller ‘Session’ directed by Haim Bouzaglo. In 2013, she was seen portraying the character of a Mossad assassin in the French-Israeli crime-caper comedy film ‘Kidon.’ In the meanwhile, Bar also appeared as a guest judge on ‘Germany’s Next Top Model,’ a show anchored by German-American Supermodel Heidi Klum.

In November 2012, Bar Refaeli launched her model casting show titled ‘Million Dollar Shootingstar.’ The show was aired on the German TV channel Sat. 1. Bar became a household name in Israel with her appearances as the host of the show ‘The X Factor Israel’ in the years 2013 and 2015 respectively. Within a short span of time, the show earned the distinction of becoming the most-liked Israeli music show.

The blue-eyed beauty achieved unmatched success as a model. Bar Refaeli was the face of many national and international fashion brands including the likes of Luisa Cerano and lingerie brand Passionata. She managed to ink big deals with brands like Ralph Lauren and Victoria’s Secret. Some of her most notable ad campaigns are with high-profile fashion brands like Escada, Gap, Chanel, Fox, Samsung, Reebok and many more.

During her career as a model, Bar Refaeli has graced the cover of many famous magazines like Marie Claire, Elle, Madame Figaro, Harper’s Bazaar, Cosmopolitan, Maxim, DTLux, F. She has also appeared in fashion editorials like GQ Germany, Grazia France, Vanity Fair Italy and Esquire USA to name but a few. Bar Refaeli also walked the ramp for fashion luminaries Accessorize, Subaru, Marco Bicego, and Besni.

Bar Refaeli also tasted success as a businesswoman and investor. She has stakes in many business ventures in Israel. In 2011, Refaeli teamed up with former model and attorney Dudi Balsar to launch the E-commerce company ‘Under.me.’ The company deals with designer underwear. She launched an iPad app in 2013 named ‘Mika Look’ which enabled users to buy the items worn by the models.

Bar Refaeli supports the non-profit organization Project Sunshine. The NGO takes care of children suffering from critical diseases. In 2006, she joined hands with Ahava to rescue the pets dumped during the 2006 Lebanon War. Bar has also advocated for a reduction in the use of plastic bags in Israel under the slogan ‘One Bag Less’. She collaborated with Israel Water Authority and initiated a campaign to spread awareness about the judicious use of water and the importance of its conservation. She has also voiced her opinion in favour of legislation for civil marriages in Israel.

Bar Refaeli has won many awards for her exceptional fashion sense and spectacular looks including the ‘World Style Award’ in 2009 and the Vienna Fashion Award for ‘Style Icon’ in 2013.

Bar Refaeli has been romantically linked to many stars in the past. She was initially dating Baywatch actor David Charvet. However, her most talked about relationship was the one with Hollywood hunk Leonardo DiCaprio. The two began dating in November 2005 after having met at a party in Las Vegas. Theirs was an on-and-off kind of relationship, and they finally parted ways in May 2011. In March 2015, Bar got engaged to Israeli business tycoon Adi Ezra. The two tied the nuptial knot on 24 September 2015 and are blessed with a daughter.