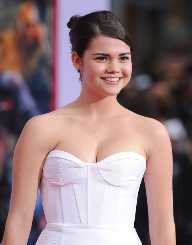 Maia Michell was born on August 18th, 1993 in Lismore, New South Wales in Australia. She is a singer and an actor who is popularly known for the role she plays in the TV series Mortified. She also gained her fame from her role as Natasha Hamilton in the Australian TV series called Trapped. She also featured in an American TV series, the Fosters-2013. Her role here also made her popular among the American audiences.

Maia Michell was born on August 18th in 1993 to Alex and Jill. Her father, Alex works as a taxi driver. On the other hand, Jill works in the education industry. Mitchell has a younger sibling named Charlie. She learned to play the guitar while she was still young. This is an attribute that is portrayed in some of the TV shows and films that she features in. Mitchell went for her college education in Trinity Catholic College which is located in Lismore.

Before going professional in her acting career, Mitchell acted in school plays and in a number of theatre productions. When she was only 12 years old, she was spotted by a certain talent agency which led to her debut role in the TV industry. She landed the role of Brittany Flune in Mortified. This was an Australian children series which was aired for about two seasons before being terminated in 2007.

The success that Mitchell gained from Mortified made her a star at a young age. This, therefore, made it easy for her to land another lead role in Trapped as Natasha Hamilton in 2009. During the same year, she featured in K-9 and played the role of Taphony.

With time Mitchell managed to star in the Disney Channel show called Jessie. This was in the period from 2013 to 2014. Around this time, she also made her first film appearance while playing McKenzie in Teen Beach Movie-2013. She went on to reprise her role in this movie in 2015 in Teen Beach 2. With the success that she earned right from the time she was young, Mitchell landed herself another lead role in ABC Family productions TV series The Fosters. She began featuring in the series since 2013 to date. She plays the role of Callie Adams Foster in this show.