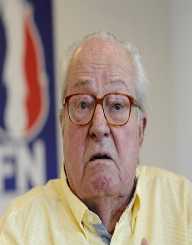 Jean-Marie Le Pen is a French politician who is known for his anti-Semitic opinions and for being xenophobic. He holds the record for the oldest individual to run for the presidential seat at the elections.

Born in La Trinité-Sur-Mer in French Brittany as Jean Louis  Marie Le Pen to Anne Marie Hervé and Jean Le Pen on June 20, 1928, he became an orphan in a young age. His mother worked as a seamstress while his father worked as a fisherman whose boat that got caught in an explosion in a mine rendering him an orphan at the age of 14. In lieu of his parents, Le Pen grew up under the care of the state. Their family practices Roman Catholicism where he studied at the high school at François Xavier located in Vannes.

Growing up, Le Pen became a rowdy child but found other interests to pursue. Initially, he tried out for the French Forces of the Interior at the age of 16 but his application was shut down by the representative of the Communist Youth at the time, Colonel Henri de La Vaissière. Unrelenting, he chose another path and pursued law in a university in Paris where he was convicted of assault and battery multiple times.

As a university student, he became the head of the student union in Toulouse wherein the group was made up of law students. The organization's goals were to involve themselves in street brawls against the communist.

After graduation, he decided to serve and enlist at the Foreign Legion where he was assigned to Indochina then in 1956  he was reassigned to Suez. Afterward, he continued to pursue politics until he was granted as a member of the National Assembly's populist party at the age of 28, making him the youngest ever to be elected at the seat. A year later in 1957, he rose in ranks where he was appointed as the veteran's organization's secretary general of the National Front of Combatants.

Le Pen held the seat for 6 years until he lost in 1962 and returned to politics again a decade later in 1972. During this time, he established the Front National far-right wing with other members of the extreme right and sought the presidential seat. He gunned for the seat consecutively from 1974 until 2007 but lost every single time.

Undeterred, he won a seat in 1984 at the European Parliament but got banned for a year from seeking office when he was prosecuted for assault charges against Annette Peulvast-Bergeal in 1997.

Aside from the assault charges, he was also widely known in the media for his xenophobic and anti-Semitic views.