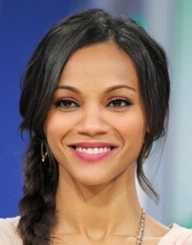 Zoe Saldana is a renowned American actress and ballet dancer, and began acting in movies such as “The Terminal, “Crossroads” and “Drumline.” She is known for her impressive roles in hit films like “Pirates of the Caribbean,” “Star Trek,” Star Trek Into Darkness,” and “Avatar.”  Major companies like Calvin Klein, Avon, and The Gap used her services as a model to advertise their products.

Zoe Yadira Saldana Nazario was born in Passaic, New Jersey on June 19, 1978. Her mother, Asalia Nazario was of Puerto Rican ancestry, and her father Aridio Saldana hailed from the Dominican Republic. She had two sisters, Cisely and Mariel and a half-brother Nipo.

Saldana was fluent in English and Spanish, and she grew up in Jackson Heights, Queens, New York. Her father was killed in a car accident when she was just nine years old. Her mother left for the Dominican Republic along with three girls to live with her parents. Saldana’s avid interest in dancing took her to ECOS Espacio de Danza Academy. Though she learnt different forms of dance, she was strongly drawn towards ballet.

Saldana appeared for the first time on television in the episode “Merger” of the drama, “Law & Order.” She made her debut in films with “Center Stage” in the year 2000 which featured her as Eva Rodriguez. The character brought out her acting and ballet dancing talents.

The year 2000 saw Saldana acting in the film “Crossroads” and also “Drumline.” In 2003, she portrayed the role of Anamaria, a female pirate in the hit film, “Pirates of the Caribbean: The Curse of the Black Pearl.”

Zoe Saldana acted in three films in 2004. They were “Temptation,” “The Terminal” and “Haven.” In 2005 and 2006, four of her films “Constellation,” “Premium,” “Dirty Deeds,” and “Guess Who” were released. In “Guess Who,” she played the lead role along with Ashton Kutcher.

Saldana reached her zenith in 2009 with her performances in films “Star Trek” and “Avatar”.

The year 2010 featured her in four films: “The Losers,” “Burning Palms,” “Death at a Funeral” and “The Takers.” In 2011, Saldana appeared in a crime film “Columbiana” and a romantic movie, “The Heart Specialist.” She played a romantic role in the movie “The Words” in 2012.

Zoe Saldana reappeared in the role of Nyota Uhura in “Star Trek Into Darkness” in the year 2013. In 2014, she acted the part of Gamora in the movie “Guardians of the Galaxy.” She took part in the television serial “Rosemary’s Baby” in the same year.

Zoe Saldana shot into fame in 2009 with her acting in “Star Trek” as Nyota Uhura and in “Avatar” as Neytiri. Both the films were chartbusters with remarkable collections.

She again stole the hearts of critics and the audience with her performance in another Star Trek enterprise film “Star Trek Into Darkness” in 2009. She replayed the part of Nyota Uhura.

Zoe Saldana is working in “Avatar 2” as Neytiri, and the film is likely to be exhibited in 2017.

Zoe Saldana's interest in fashion pushed her to model for Calvin Klein, Avon, and Gap. She was seen in plenty of magazines such as W, InStyle, Essence, Latina, Elle, Essence, Vanity Fair, and Nylon.

Zoe Saldana had a liaison with Keith Britton for 11 years. Keith was CEO of My Fashion Database in addition to being an actor. In 2010, both got engaged, but the partnership ended in 2011.

She had another relationship with actor Bradley Cooper from December 2011 to January 2013.

Zoe Saldana married an Italian artist, Marco Pergo in June 2013 after a short courtship. The couple was gifted with twin sons, Bowie Ezio and Cy Aridio in November 2014.

Zoe Saldana is an astute businesswoman and has developed her brand of clothing, fragrance, and vodka. She is also the owner of many restaurants.