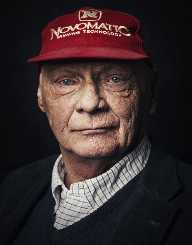 Andreas Nikolaus Lauda is a racing driver.  He won the championship three times.

Niki Lauda was born in Vienna, Austria on 22 February 1949 to a wealthy family.  He started his racing career very early in life.  His family was not interested in his career as a racing driver.  Niki’s driving skills were good, and soon he enrolled in Formula One Team in 1972. Niki Lauda signed his contract with the team owner Enzo Ferrari in 1974. Niki’s first race was in Argentine Grand Prix. He finished second in the race.

Niki Lauda took part in Spanish Grand Prix and Dutch GP.  His participation in Drivers’ Championship won him the fourth position. He was an expert in testing the cars. He finished in third place at the Italian Grand Prix at Monza.  He participated in the United States GP at Watkins Glen.  Niki won four F1 seasons in 1976 and secured the second position in the other two races. His fifth win was at the British GP.

Niki Lauda met with an accident in the 1976 German Grand Prix at Nürburgring. His Ferrari caught fire while negotiating a bend. Niki Lauda suffered severe burn injuries and went into coma. He underwent surgery for replacement of his eyelids.  He started put on the caps to conceal the scars.  His style of wearing the cap was used for advertisement.

Niki Lauda participated in the Italian GP but finished fourth. Lauda then participated in the Canadian, United States and Japanese GP.  Lauda withdrew from the Japanese GP in view of his blinking problems and weather conditions. The cordial relations with Ferrari got strained.  Nike terminated his contract with Ferrari and quit. Niki Lauda then signed with Brabham-Alfa in 1978.  He could register one win and suffered two failures.

In South Africa, the car that he used had several problems, and Nike had to abandon the car.  He won the races at Sweden and Italy.  He also participated in Montreal, Great Britain, and the Netherland.  In 1979 he took part in the non-Championship 1979 Dino Ferrari Grand Prix and won the championship.  Lauda retired in 1978 to manage his own business.  He returned to Austria to manage, Lauda Air.

Three years later, Niki Lauda staged a comeback to racing. He won the Long Beach Grand Prix. He then raced in the 1984 Monaco Grand Prix and won the championship. He won the Grand Prix at his hometown Austria. Lauda had an unfortunate season in 1985 because of several retirements during racing.  He retired again after the 1985 Austrian Grand Prix.

Niki Lauda, in 1993, resumed an Executive position at Formula One and in 2001 he was assigned the position of the Principal of the Jaguar Formula One Team. Later in 2003, the position was treated as terminated.

Niki Lauda assumed office as non-executive chairman of Mercedes AMG Petronas F1 term and helped in the execution of a contract for three years between Lewis Hamilton and AMG Mercedes. Lauda sold his airlines to Austrian Airlines in 1999 and started another airline and named it Niki in 2003.

Niki Lauda appeared in a film, Rush, an adaptation of the 1976 F1.  He appeared in Nike Lauda: Tragedy in the Air.

Niki Lauda married Marlene Knaus in 1976 and separated in 1991.  The couple had two sons, Mathias and Lukas. Mathias became a racing driver, and Lukas took the role of a manager for Mathias.

Niki Lauda had a relationship with another woman and had a son, Christoph. Niki Lauda had a twin from Birgit Wetzinger whom he married in 2008. One of the twins was a boy, and the other was a girl – Max, and Mia.

A stamp has been issued in 2005 by the Austrian post office in his honor.

The International Motorsports Hall of Name mentions his name in 1993.

The Austrian and German television provides for commentary on Grand Prix.