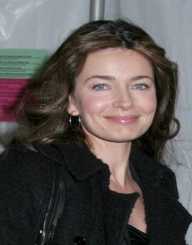 Paulina Porizkova is best known as the Czechoslovakian star in both modeling and acting industry. She is recognized as the best woman to grace the Sports Illustrated cover. In the early 80s, he became the talk of the day by moving to the top silver screens. Her film roles found the beautiful diva sticking to what she loved best. She has appeared in comedies like Wedding Bell Blues, Her Alibi, and The Intern. She is also an inspiring author of books such as The Adventure of Ralphy the Roach. She is an American national but comes with dual citizenship from the US and Sweden.

On April 9, 1965, Paulina Porizkova was born in Prostejov, Czech Republic. She was unlucky to face the world with a refugee kind of life. The Cold War regime strongly traumatized the little girl. In 1968 her parents opted to seek rescue to Sweden. She was left in the hands of her great-grandmother at the age of three. An unfortunate thing happened when the new Czech rulership declined the freedom of Paulina. She remained in the Czech Republic as her parent’s endured hunger and unsuccessful plans to save their only child. Her mother tried to rescue her daughter secretly, but she was sent to prison without notice. In 1974 Porizkova was granted freedom when Swedish Prime Minister declined to visit Czechoslovakia by then. Paulina still remembers the ordeal till today.

Paulina Porizkova was encouraged by her friends to join the modeling industry. Her close friend was competent when it came to photography field. She took a chance by making hundreds of Paulina’s photos. One snap was taken to one of the Elite agencies, and they waited for end opportunity. The aim was that her friend would get noticed for her photography talent. Paulina’s natural beauty caught the attention of the modeling agency. She was tested severally and later on; she received a ticket to fathom her career in Paris. As time passed Paulina earned a new face in the modeling industry. She gave it all by spending half of her time perusing and watching fashion galleries. She also managed to travel and spend most time outdoors. She aimed to relax her mind and forget about her childhood memories.

At the age of 19, her modeling career started. Paulina Porizkova became the youngest and teenage model to cover the Sports Illustrated magazine. She also majored in several magazines such as Elle, Us, Glamour, Cosmopolitan among others. She also appeared in countable swimsuit calendars that were all photographed by Mario Glaviano. Since then she managed to sell over thousands of calendars and beyond. It was always a new trend for others, but for her, she hated the modeling industry but loved the money. Her useful deal came when she signed a long-term contract with Estee Lauder Company. The $6 million contract transformed from her from the bikini suits to a sophisticated supermodel. In 1990 and 1992 she was on the list of the 50 most beautiful people.

Paulina Porizkova appreciated a chance when she was called to rule out other models in America’s Next Top Model. In 1989 Paulina married the love of her life, Ric Ocasek, the leading singer of The Cars. The couple has two sons, Oliver and Jonathan. She always defined her union as a blessed and perfect place to be. In reality, Porizkova still misses the modeling and acting fame, but she believed that she would come to find her true self as a writer. Paulina is still the same elegant and beautiful soul we all knew in the 80s.