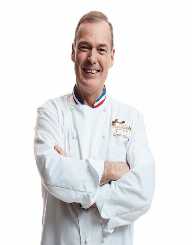 Jacques Torres is a world-famous chef known for his culinary and baking prowess. Nicknamed Mr. Chocolate, he is best known in the US for his chocolate-making skills and chain of selling stores.

Jacques Torres was born to French parents in Algiers, the capital of Algeria in 1960. He moved with his parents to France during the Algerian war of independence. Torres grew up in the southern French town of Bandol. After his elementary education, he started taking culinary studies at a local school when he was 15 years. He majored in pastry and baking. By the age of 17, he was a leading student in his class. Torres graduated top of his class at the pastry school.

He was drafted into the compulsory military service when he turned 20. He served for a while and was discharged. Torres went back to the kitchen. He worked in some local eateries until he met Chef Jacques Maximin.

Torres began working under chef Maximin at the Hotel Negresco. He managed to impress the two-star chef with his craftsmanship and knowledge of basic culinary skills. Torres spent his next eight years under the tutelage of Maximin. Torres graduated to working as a regular chef at the hotel. He went to study for a college degree. After his studies, he graduated with an Arts degree majoring in Pastry. Torres taught for pastry for three years from 1983. He completed his teaching at the Cannes Culinary School in 1986.

In 1986, Torres earned another milestone in his career. He was bestowed with the Best Craftsman of France title. This was a prestigious title earned by the elite chefs who distinguished themselves with exemplary culinary skills. Torres was the youngest recipient at the age 26.

In 1988, he left France for the US. Jacques Torres was hired by the Ritz-Carlton chain of hotels. He was posted initially to Los Angeles. Later on, Torres was posted to the Atlanta part of the hotel chain. He worked as the lead pastry chef in the corporate section. One year after, Torres met Sirio Maccioni. The two made a cordial acquaintance and Maccioni hired him to work at his restaurant in New York. Le Cirque was a leading restaurant which specialized in French cuisine and was frequented by the elegant personalities of New York. Torres spent over a decade at the French restaurant.

Torres left his job at Le Cirque in 2000. He then opened his chocolate making shop in Brooklyn district of New York. He now has several selling outlets and an ice cream manufacturing shop.

In one of the crowning moments of his career, He was part of the team that prepared that hosted the fundraising dinner for President Barrack Obama. In 2010, Torres and his team hosted the US Democratic Congressional Party fundraiser at the St. Regis Hotel in New York. The dinner cost USD 30,000 per plate. He has participated in other dignitary luncheons and dinners in New York.

While working under Maccioni, Torres released an educative television series called Dessert circus With Jacques Torres. This 52 episode series was aired on public television free of charge. He authored a set of three culinary cooking books. To promote his chocolate skills to the public, he had a series called Chocolate with Jacques Torres. This was a Food Network series that lasted for three years.

In 1993, Torres was admitted to the French Culinary Institute in New York City. He helped design the faculty’s pastry cooking curriculum in 1996. He then became the institute’s head of Pastry Arts faculty.

In August 2007, Torres got married to his former apprentice and fellow chocolate maker Hasty Khoei. The couple has one child. Hasty also owns a chocolate shop in Los Angeles. The shop in Beverly Hills is known as Madam Chocolat. Like Her husband, Hasty deals in handcrafted confectionaries, targeting the high-end market clients.

Torres has a 54-foot boat. When he is not cooking, he goes fishing with his friends and partners. His favorite fishing partner is his longtime business ally, Ken Goto.

He grew up without a solid formal education. Despite being a son of an average carpenter, Torres pursued his passion and became part of the greater American dream reality. His name Jacques Torres is synonymous with pastry and chocolate across the districts of New York City. Mr. Chocolate is today an illustration of how passion and hard work can be harnessed to achieve an ultimate lifelong goal.