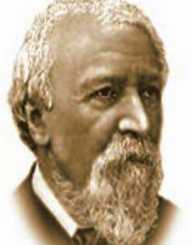 Robert Browning was an English poet and was best known for his modernist and experimental style of monologues.

Robert Browning was born in Walworth, Surrey in England on 7 May 1812. His parents were Sarah Anna and Robert Browning. His father worked as a clerk for the Bank of England. Browning’s father was a keen scholar of literature and had built up an extensive library over his life; this meant Browning lived in a household were literature was held in high regard. Browning developed a deep dislike for school and was instead home taught by a tutor.

Browning excelled at languages and was intensely interested in English poetry. Browning studied Greek at the University College Dublin as his parent’s religion banned him from Oxford and Cambridge which were Anglican universities. Despite his parents' efforts, Browning wished to dedicate himself entirely to poetry.

As a child, Robert Browning had written poetry and compiled an entire book by age twelve. He was unable to have this work published, so he destroyed the work. Browning was an admirer of the Romantic poet Shelley and his first published work, Pauline, a Fragment of a Confession was a homage to Shelley and his writing. The work received some notice from critics, but it was a commercial failure.

Paracelsus, a poem that focussed on a sixteenth-century alchemist, was Browning’s first commercial success. It also received praise from the literary giants of Victorian England, Charles Dickens and William Wordsworth. The success of Paracelsus brought Browning into the literary circles of London. Browning met the actor William Macready who asked him to write a play. Browning wrote three plays in his career, but none enjoyed success. Browning’s poem Sordello was about an Italian poet but received hugely critical reviews as many viewed it as unintelligible and purposefully obscure.

Bells and Pomegranates a series of works was published over five years. Robert Browning worked on his best-known works in Florence; these poems were eventually compiled into Men and Women.

Browning’s real success occurred after the 1868 publishing of The Ring and the Book. The Ring and the Book featured Browning’s trademark blank verse monologue style. The work brought him renown across literary circles and was a huge success. Browning continued to produce lengthy poems during the 1870s, the best known of these was Red Cotton Night Cap Country. In 1881, the Browning Society was founded to study Browning’s work.

Robert Browning was one of the few poets to have their work studied while he was still alive. A later work of Browning’s, Parleyings with Certain People of Importance in Their Day, had Browning converse with past literary figures, much like Dante in The Divine Comedy.

Robert Browning married Elizabeth Barret in 1846. The two had met the year before and moved to Italy after their marriage. Her father disinherited Elizabeth for the union. She suffered from ill health throughout her life, and the move to Italy was to help with this.

Elizabeth was herself a poet and well known during her lifetime. Together Browning and his wife had a son Robert Browning, who was nicknamed Pen. Their marriage lasted until Elizabeth’s death in 1861. Browning returned to England with his son following his wife’s death. Browning never again returned to Florence, where his wife died. Browning died in his son’s house in Venice on 12 December 1889.