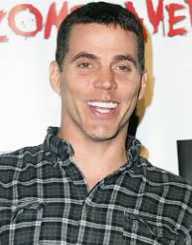 Steve-O was born on June 13, 1974. He is an American, British and Canadian citizen. He is an actor. Steve is also a stunt performer, producer, stand-up comedian, an author, a musician, and a clown. He is renowned for his role in ‘Jackass’ and ‘Wildboyz’ TV Series. He is currently Forty four years old.

Steve-O was born Stephen Gilchrist Glover on June 13, 1974, in Wimbledon, London, England. He was born to Richard Edward Glover and Donna Gay Glover. In 1983, he alongside his family went back to London.

Steve-O's career started by his taking videos of himself and sending them to the then Jackass producer who later recruited him. In 2000, he appeared as himself in several episodes of the television series ‘Jackass’ until 2002. In 2001, he released his DVD ‘Don’t Try This At Home-The Steve-O Video Vol. 1’ which later landed him in trouble.

In 2002, he released the DVD ‘Don’t Try This At Home-The Steve-O Vol.2’ which was his own. He also appeared in the film ‘Jackass: The Movie’ as himself.

In 2007, Steve-O appeared in ‘National Lampoon’s TV: The Movie.’ He also appeared in the films ‘Bam’s Unholy Union’ as himself and in ‘Dr. Steve-O’ as Dr. Steve-O. In 2008, he wrote, recorded and released his first mixtape ‘The Dumbest Asshole in Hip Hop.’

He was later taken to a psychiatric hold due to his changes in behavior. In 2009, he appeared in the film ‘Passenger Side’ as a Bar Patron. He also appeared in the television films ‘Dancing with the Stars’, ‘Nitro Circus,’ ‘Steve-O: Demise and Rise’ and in ‘Glenn Martin DDS.’

In 2013, he featured in the television films ‘The Eric Andre Show’ and Ridiculousness.’ The following year, he appeared as himself in the film ‘Lennon or McCartney’. He also appeared in ‘The Jump’ which was a British TV series. In 2015, he appeared in ‘Barely Lethal’ as Pedro.

Steve later appeared in some episodes of the Web series ‘Game Grumps,’ ‘Shane and Friends’ and ‘DoubleToasted.com.’ In 2017, he appeared s himself in the documentary films ‘What the Health’ and ‘Dumb: The Story of Big Brother Magazine.’

Steve-O later appeared as Tommy X in the television film ‘Billy Dilley’s Super-Duper Subterranean Summer.’ He also appeared in the Web series ‘H3h3Productions’ and ‘Hot Ones.’ In 2018, he appears as himself in ‘Game Over, Man.’

He also appears as himself in the television film‘Sky1’s Revolution.' He then appears in the Web Series ‘David Dobrik’, ‘The Sidemen Show’ and ‘Ultimate Expedition.’

In 2018, Steve-O got engaged to Lux Wright. He currently resides in Los Angeles, California, United States. He is presently Forty four years old.