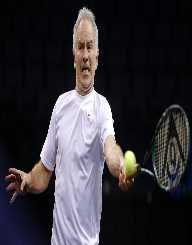 John McEnroe was born on February 16th, 1959. He was born in Wiesbaden in West Germany. At the age of 18 years, he made a record for being part of the Wimbledon semis in 1977. His career was a significant success as McEnroe bagged some Grand Slam championships. His outstanding tennis playing skills earned him nationwide recognition. After his retirement, his TV appearance also made him famous.

John McEnroe was born to American parents named John Patrick McEnroe Sr. and Kay Tresham. John was the eldest son of this couple. Patrick McEnroe, his father, was of Irish descent and worked with the U.S. Air Force. In 1960, the family shifted to the New York City. They settled in Douglaston, Queens, where John McEnroe grew up.

McEnroe schooled in the Trinity School where his sports talent was unveiled. He showed interest in all sorts of sports including soccer, basketball, and tennis. By the time he was eight years old, he had concentrated more on tennis as he played with his younger brothers. One of his younger brothers Patrick McEnroe also succeeded later in his tennis career.

By the time he was nine years old, McEnroe had joined Eastern Lawn Tennis Association. His natural flair in the court was evident as he majored in several regional tournaments. After graduating in 1977, his career took another path as he won major championships. That same year, McEnroe participated and won in the French Juniors Tournament held in Europe.

At first, John had the eye for the junior title in Wimbledon competitions. This changed after he qualified in the men’s category. He was just 18 years and made a record for being the youngest tennis player to reach semis. The young talented star was however knocked-out by Jimmy Connors.

It is from McEnroe’s exceptional performance that he earned himself a tennis scholarship to join the university. He attended the Stanford University situated in California. While McEnroe was taking the lead for his teammates in 1978 NCAA Championship, the Cardinals won. This was his school team. He immediately decided to go pro during summer the same year. A competition was stiff as he was eliminated during the first round at Wimbledon. Nonetheless, he tried his best in the U.S. Open and was defeated in the fourth round.

After trying his luck in leading tournaments, John decided to major on playing Davis Cup. Tony Trabert admired the young talented John McEnroe and took the risk of coaching him. McEnroe went to win American Davis Cup. This had not been won in six years. Years later, the star went on to earn the position of U.S. Davis Cup team captain.

Decades later, John McEnroe was still winning titles. This time they were those where he played singles. Sadly, none of these claims were Grand Slams. In 1986, the star took a six-month leave. Upon returning in 1987, he was suspended for his outbursts.

In 1989, he was crowned the U.S. Open winner and also won at Wimbledon in 1992. All these titles were for his doubles play. Singles were becoming tougher and more desperate as younger talents were occupying the top spots. His misconduct suspended him in 1990s Australian Open while playing with Mikael Pernfors. He later retired from his tennis career in 1992.

John McEnroe second career as a TV broadcaster began in 1995.