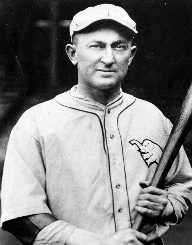 Ty Cobb was the first “millionaire” in the history of Baseball. He was known and always remembered for his freakish and notorious behavior on the field. He also had an erratic and ambitious personality which made him the one to beat in games. Many people believe his reputation was one of the toughest and admirable among baseball players. His statistical records, however, show that he was very determined and highly respected. He is known for batting an average of .366 which is still the highest in the history of baseball.

Ty Cobb was also the leader as well as the all-time hit leader. He was the fearsome American League baseball outfielder and always regarded as the Georgia Peach. He played over 3, 035 major league games and was known to have committed the greatest errors of any American League player. His legacy still has a strong foothold in the world despite the tarnish it experienced. He was known to be very temperamental and highly aggressive with his way of playing.

Tyrus Raymond Cobb was the name given to him at birth on the the18th day of December 1886. He was born to Wiliam Cobb and Amanda Chitwood in Narrows, Georgia. He was greatly influenced by his father who encouraged him to join an organized baseball. He, however, joined the Steelers and was paid a $50 as a salary. His incredible baseball talent was noticed. Ty Cobb was later sold to Detroit Tigers where he earned $750 as salary in 1905. His life was changed when his father was shot dead by his mother having caught her red-handed in the act of infidelity. She was later charged but acquitted. The young Cobb was shocked and was not the same again. He often referred to his violent on-field behavior to this incident.


THE CAREER OF A STAR

The end of 1905 was very hard for him as he got subjected to an intense hazing from his new teammates. It was harder for him to cope because Ty Cobb was still grieving his father’s death. However, things changed in 1906 as he was on the verge of having his biggest career success in the Major League history. As at when he was signed in 1905, he was the youngest player in the league at age 18. His success with his debut match doubled his salary to $1,500 in a year later. He, however, became his team permanent center field and had an average .316 hit in 98 games. He led the Tigers to their three consecutive wins becoming the youngest player to win a batting championship for 20 years. His best season was in 1911 where he earned a personal best of 248 hits, 127 RBIs, 147 runs and .420 batting average.

Ty Cobb had no equal at that time as his batting skill as well as his speed was no match. HE has a sharpened way and a great skill of bringing an attack to a halt. However, his temperamental nature often gets the better part of him. He has once charged against the stand to beat a cripple heckler. In 1921, Ty Cobb earned a dual position as both the player and manager of the Tigers. He held this position until 1926 when he announced his retirement. He was however accused of fixing games before Commissioner Kennesaw Mountain Landis exonerated him in early 1927. He however retired after playing with Philadelphia Athletics in 1928. He left the club as the all-time leader in dozens of the categories including batting, hits, runs, score and games among others.

In August 1908, Ty Cobb married Charlotte Lombard whom he lived within her father’s estate before moving to their house five years later. In 1930, he later moved his family to a Spanish Ranch estate. However, his wife filed a divorce and got separated in 1947. The marriage is blessed with three sons and two daughters. At age 62, he married Frances Cass, a divorcee in 1949 but the couple divorced in 1956. He built Cobb Memorial Hospital, the Cobb Educational Fun, and Ty Cobb Healthcare System after the death of his two sons. He lived in luxuries of wealth having invested in Coca-Cola and General Motors. He died in July 1961 of Prostate Cancer in Atlanta. However, his legacy still lives on in the sport of baseball.