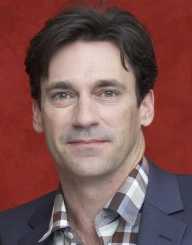 Jon Hamm is an American actor and producer born on March 10th, 1971. He is best known for his role in Mad Men of AMC series as Don Draper. This earned him many awards and also critical praise. The talented actor has also starred in films such as The Town and Bridesmaids. His debut role in the film industry was in the first-grade production, Winnie-the-Pooh.

At the age of sixteen, he acted a role in the film Godspell as Judas. In the 2015 film Minions, he is the voice of Herb Overkill. Jon Hamm has always been a fan of St. Louis Cardinals. In fact, he was the 2011 Official World Series film narrator of the team after they hired him.

Sadly for the talented actor, he became an orphan at the age of 20 after he lost both his parents. His mother died when he was 10 and later his father when he was 20. Throughout his career, Jon Hamm has won some awards. In both 2008 and 2016, he won the Golden Globe Award.  Additionally, his role in Unbreakable Kimmy Schmidt earned him the 2015 Emmy nod.

Jon Hamm was born on March 10th, 1971. His place of birth was in St. Louis, Missouri in the United States. He is the son of Daniel and Deborah. His father earned a living managing their family trucking company. His mother, on the other hand, served as a secretary. At the age of 2, his parents divorced.

His mother raised him on her own in St. Louis County, Creve Coeur. Sadly, she passed away a few years later following colon cancer. Jon was only ten years old at the time of his mother’s death. As a result, he was forced to move in with his father who lived in Clayton, Missouri. Sadly, Jon lost his father when he was 20 years old making him an orphan.

Jon Hamm attended a private school located in Ladue known as John Burroughs School. He participated actively in the baseball, football and swim teams of the school. He also dated Sarah Clarke who later became a prominent actress. He then graduated in 1989. Subsequently, he joined the University of Texas followed by the University of Missouri. In 1993, he attained his B.A degree in English.

After his graduation, Jon Hamm taught eighth-grade acting at his former high school. Among his students was the actress Ellie Kemper. He later moved to Los Angeles in 1995 to pursue his career in acting. However, it wasn’t easy for Jon to land an acting job easily as he had anticipated. Luckily in 2000, he landed his first role in The Hughleys, the comedy series.  He was also featured in Space Cowboys and Providence.

The year 2007 marked a turning point in Jon’s career with his role in Mad Men. In the film, he was cast as Don Draper, a philandering ad executive. The film was a huge success and won the 2011 Emmy Award for Outstanding Drama Series among other many other awards. Jon himself won the Emmy Award in 2015 for this role.  In 2014, Jon Hamm starred in The Million Dollar Arm movie of heartwarming sports.

Jon Hamm was involved in a long-term relationship with Jennifer Westfeldt since 1997 till 2015.