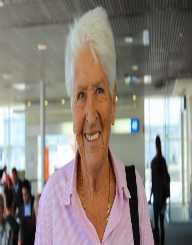 Born into a large, working-class family in Balmain, Sydney, Dawn Fraser was the youngest of eight children. Her parents were Kenneth and Rose Fraser. Fraser’s father was from Scotland, her mother an Australian. From a young age, Fraser, along with her siblings, used to frequent the sea baths at Balmain. It was here that swimming coach Harry Gallagher saw her swimming. When Fraser was fourteen years old, she started training with Gallagher.

After her success at the 1956 Melbourne Olympics, Dawn Fraser won gold at the 1960 Rome Olympics. She became the first woman to win gold in the same event in two consecutive Olympics. In 1962 at the Commonwealth Games in Perth, Fraser won four gold medals. Then at the Tokyo Olympics in 1964, she won gold again in the 100 meters freestyle.

In 1962, Dawn Fraser became the first women to swim 100 meters freestyle in under a minute. Her record was 58.9 seconds.

The International Olympic Committee named Fraser the World’s Greatest Living Female Water Sports Champion in 1999. Fraser was recognized for her contribution to swimming and awarded the Australian Sports Medal in 2000. Then 2013, she was voted the Top Female Australian Athlete of All Time.

Dawn Fraser has had her fair share of tragic events. Her much-loved brother Donny died of leukemia when she was twelve. Then her father died, also of leukemia, in 1960. Tragedy struck again in 1964. Fraser was driving her mother when they were involved in a car accident. Her mother died as a result of the accident.

Dawn Fraser was married to Gary Ware between 1965 and 1968. They had a daughter, Dawn Lorraine. By all accounts, the marriage was not a happy one. Fraser is on record as saying that her ex-husband’s gambling was a big problem for her. She has also spoken about domestic violence.

An outspoken person, she remains the first lady of sport in Australian. In Fraser 2013 voted the Top Female Australian Athlete of All Time. Her reputation as a larrikin has endeared her to the Australian public as much as her swimming achievements

The historic swimming pool in Elkington Park, Balmain, built in the 1880s, has been renamed Dawn Fraser Baths.

Dawn Fraser states on her website that she is non-religious.

At times Dawn Fraser has suffered from depression.

Entering politics in 1988, she was elected an Independent for the seat of Balmain in the NSW Legislative Assembly. She spent three years as an independent politician.

For a time Fraser was the licensee of a pub, the Riverview Hotel in Balmain Sydney (1978-1983). Today, Fraser owns the family home she grew up in Balmain.

Dawn Frazer’s hobby was spending time with Jackson, her grandson; her animals and traveling in her motorhome.

Dawn Fraser had a reputation for being unpredictable and rebellious. For instance, she refused to swim the butterfly in 1962, and this annoyed the team management and officials. There was also an incident of her not wearing the official swimsuit during an Olympic opening parade. She said that it was because it was too uncomfortable, so she wore an older swimsuit and this annoyed sponsors.

During the 1964 Tokyo Olympics, hijinks involving the Olympic flag turned into something more serious. A group of swimmers tried to remove the flag from the flagpole outside Emperor Hirohito's palace. Fraser was accused of trying to steal the flag. After the Olympics, Fraser was banned from participating in her sport for ten years.

In her autobiography, Things That I Learned Upon the Way, Fraser states that it was not just the flag stealing incident that led to the Swimming in Australia ban. The official reason given for imposing the ban was that she had worn an unofficial swimsuit.

The ban was overturned four years later but came too late for Fraser to prepare for the Mexican Olympics held in 1968. Ironically officials gave the flag to Dawn Fraser. Later, she sold the flag, and it raised $75,000. The buyer promptly gave the flag to Fraser’s daughter.