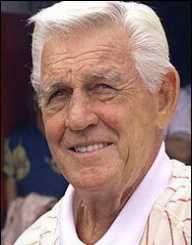 Gene Mauch became known for his defense, speed, and base-to-base (little ball) abilities on offense rather than power hitting. As a manager, Mauch managed teams like the Philadelphia Phillies, Montreal Expos, Minnesota Twins, and California Angels where he retired for ill health.

On his retirement, his career victories standing at 1,902, ranked 8thin the major league history while his total games of 3,942, ranked 4th.

Gene William Mauch was born on November 18, 1925, in Salina, Kansas. He grew up in Kansas and Los Angeles. He received education at John C. Fremont High School.

Gene Mauch started his professional Major League Baseball career in 1944 through 1957 playing for six professional teams. He played for Brooklyn Dodgers from 1944 and 1948 and moved to Pittsburgh Pirates in 1947 playing for a season. From 1948 to 1949, he played for the Chicago Cubs and then Boston Brave from 1950 to 1951.

Mauch also played for St. Louis Cardinals in 1952 before finally playing for Boston Red Sox from 1956 to 1957. He had played for Los Angeles Angels of the Pacific Coast League in 1954 to 1955 before his final move to Red Sox for the 1956-57 season. Mauch’s final season with Red Sox was the most productive in his career. He played as the second baseman starting in 65 games. He made a career record of batting .270 with 60 hits.

In 1953 at the age of 27, Boston Brave appointed Mauch to be the player-manager of their Double-A Atlantic Crackers farm team within the Southern Association. This was his first managerial experience.

That season the team finished 84- 70, in third place. During this period, he became known for his frequent scuffles with umpires. After retiring from professional baseball, Mauch from 1958 to 59 piloted the Red Sox’ Triple-A affiliate, the Minneapolis Millers. The team managed to reach the Junior World Series as American Association champion, in each of the seasons. They won the 1958 Junior World Series championship.

In 1960, John J. Quinn, who had worked with Mauch at Boston Brave, as general manager, asked him to replace Eddie Sawyer who had resigned as a pilot Philadelphia Phillies after their first game.

Mauch took up the challenge, becoming the youngest manager in the Major Leagues in 1960 at age 34. During his first season with the Phillies, the team made a record of 58-94. The team, however, had a poor record the following year finishing 47-107 and lost 23 consecutive games from July 29 to August 20.

This became the third-longest losing streak in baseball history. The Associated Press named Mauch as the manager of the year after the team’s impressive performance of 81-80 in the 1962 season. He left the team during the 1968 season.

Montreal Expos appointed Mauch as the manager of the team in 1969, leading it to a 52-110 that season. The team’s performance improved the subsequent seasons. He was however sacked in 1975 after finishing 75-87. Mauch’s next destination was the Minnesota Twins in 1976.

The following year, the Angels won the American League’s Western Division with 93-69. In1984, Mauch was sacked for failing to qualify Angels for their maiden World Series. He returned to the Angels in 1985, finishing the season with 90-72, one game behind the Kansas City Royals.

The team won the Western title the following year with 90-70. Gene Mauch retired before the 1988 season at age 62 citing ill health. However, seven years into his retirement, Mauch returned as bench coach with the Kansas City Royals in 1995.