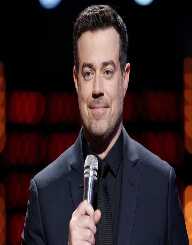 As a teenager, Carson Daly attended Santa Monica High School. It was while at this school that he played golf as a hobby. His skill in golf would later allow him to have a scholarship for college. He later went on to attend Marymount University. There, he studied theology. At the time, he did not know whether he wanted to become a priest or a professional golfer.

Carson Daly eventually decided that he would rather become a professional golfer than a priest, but he knew that he still had to train if he wanted to be a good enough golfer to make it into the PGA tournaments. Since he wasn’t making money from practicing golf, he got a job working at a radio station. He first started out as just an intern, but the job soon turned into much more than that.

Over the years, Carson Daly worked with several different radio stations as a radio personality and DJ. However, it wasn't until he was working with KROQ in Los Angeles that he was noticed by MTV. The television station loved his charisma on the radio and invited him to work on their television network.

In 1998, Carson Daly began his career with MTV. He was a producer on the show, Total Request Live. He also was on camera for his show. His charm and wit made the show a success, and opened, even more, doors for Daly.

In 2000, Carson Daly began working as an actor. However, almost all of the roles that he has ever played in television shows and movies he played himself. This was the case for the roles he played in Movie Stars, Josie and the Pussycats, Pauly Shore is Dead, and Windy City Heat. The only exception to playing himself was when he voiced the character of David Sorensen in the made-for-television animated film, Daria in ‘Is It Fall Yet?’. However, he did not stick to acting for long, as all of these projects took place quickly, between just 2000 and 2003.

Possibly Daly’s biggest claim to fame was his talk show, Last Call with Carson Daly, which aired from 2002 to the present (as of 2017). This show was not like the average talk show. Instead, Carson Daly traveled to various venues in Los Angeles and talked about up-and-coming entertainment, like films and new bands. Daly worked as both the executive producer and host of this show.

In 2011, Carson Daly took on a new project (while still working on his talk show) as the host of the televised singing competition, The Voice. This show, like all of this others, was a hit when it first began and continues to run successfully on television.

Other projects that Carson Daly has also worked on include acting as himself in Powerhouse (2012) and working on the Today show’s Orange Room since 2013.

All of Daly’s awards are due to his television career. Some of his most impressive awards are listed below.

Carson Daly married Siri Pinter in 2015. This couple has three children together: Etta, Jackson, and London.