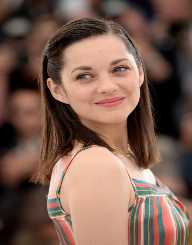 Star of English and French language films, Marion Cotillard persevered in acting in small roles before she achieved stardom.   Today she is known for her lead roles in dramas and thrillers.

Marion Cotillard was born on September 30, 1975, in Paris, France.  Her parents were also actors.  They lived in Orlean, France.  She moved to Paris when she was 16 to pursue her acting career.

Marion Cotillard started her career in theater in the 1990s. She had roles in television and film through the 1990s and 2000s.  Her first English role was in the TV series Highlander.  Cotillard was known in France with dozens of movies.

Marion Cotillard had a role in American films such as Big Fish and A Good Year.  However, she did not gain international stardom until her Golden Globe and Academy Award for portraying Edith Piaf in La Vie en Rose.

The number of American film roles started adding up after her Oscar win.  She starred in Public Enemies, Nine, and Inception.

The cast of Nine was nominated for an Oscar.  It was 2011 when Cotillard was the fictional mistress of Pablo Picasso in Woody Allen's Midnight in Paris and the doctor in search of a cure in Contagion.  In 2012 she played a part in The Dark Knight Rises but received more recognition for her role as a whale trainer to lost her legs in Rust and Bone.

In 2014, Marion Cotillard was nominated for best actress in the French film Two Days, One Night.  Cotillard starred in the World War II film Allied. Marion Cotillard has other careers as well.  In 2008 she starred in advertisements for Lady Dior handbags.  Cotillard is also a musician.  Her credits include co-writing and performing the song in the movie Pretty Things.

Marion Cotillard was the member of the band Yodelice performing under the name Simone.  She writes and performs songs as part of her agreement for Lady Dior.

Marion Cotillard is in a relationship with Love Me If You Dare costar Guillaume Canet since 2007.  They have one child and are expecting another in 2017.

Marion Cotillard is an environmentalist.  She is the spokesperson for Green Peace International since 2001.  She continues her work for environmental awareness and animal endangerment.

Other environmental memberships she has to include World Wildlife Federation and Nicolas Hulot Foundation.  She uses her talents to raise money for the causes she supports.