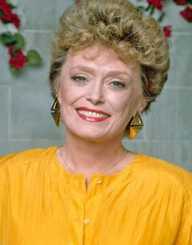 Eddi-Rue McClanahan, an American actress of repute known for portraying television characters such as Vivian Harmon on ‘Maude’ (1972–78), "Aunt" Fran Crowley on Mama's ‘Family’ (1983–84) and most famously Blanche Devereaux on ‘The Golden Girls’ (1985–92), was born on February 21, 1934, in Healdton, Oklahoma, United States of America. Her father William Edwin "Bill" McClanahan was a building contractor and mother Dreda Rheua-Nell McClanahan was a beautician. Apart from her Irish origin, she had a Choctaw ancestry courtesy her maternal great-great-great-great-grandmother, SheNiYah, who was a Choctaw Native American.

Rue McClanahan was raised in Ardmore, Oklahoma, and received her high school education from Ardmore High School. During her schooldays, she participated in the school plays and was especially proficient in oratory. She also won a gold medal in oration. She attended the University of Tulsa and secured a Bachelor of Arts degree-cum-laude with a major in German and Theater. She joined the Kappa Alpha Theta sorority and served as its Vice President.

Rue McClanahan appeared first time on stage in a hometown production of ‘The Three Little Kittens’ as a 4-year-old child. She made her professional stage debut in 1957 in a play titled ‘Inherit the Wind’ produced by Pennsylvania's Erie Playhouse. She started acting in off-Broadway production in New York City after that. She made her Broadway debut in 1969 when she appeared as Sally Weber in the musical ‘Jimmy Shine’ along with Dustin Hoffman, who played the title role.

Following her debut on Broadway, Rue McClanahan was brought into prominence by her role as Caroline Johnson on ‘Another World’. The show lasted more than a full year, and she joined the cast of ‘Where the Heart Is,’ a CBS Soap Opera, immediately after the conclusion of Another World.

During the 1970s, Rue McClanahan made a transition from Stage to Television. She caught the attention of television executive Norman Lear, and he cast McClanahan in many television shows. She was cast in a guest appearance on the popular sitcom ‘All in the Family.’ Her impressive performance in it made Norman Lear cast her in the lead role of Vivian Harmon on the show’s spin-off ‘Maude.’

McClanahan’s portrayal of Vivian, best friend of the title character Maude played by Bea Arthur received tremendous accolades and became very popular among the Americans. After the success of Maude, she co-starred with Vicki Lawrence, Ken Berry, Betty White and Carol Burnett in ‘Mama's Family’ (1983) for three years. She portrayed the character of an uptight spinster sister Fran Crowley to Mama Harper (Vicki Lawrence) in the show.

Rue McClanahan's big break on television screen came in the form of her most acclaimed role as the self-absorbed, liberated sensual Southern belle Blanche Devereaux on the television sitcom ‘The Golden Girls’ (1985-1992). She received an Emmy Award in 1987 for Outstanding Lead Actress in a Comedy Series for her portrayal of the so-called man-crazed, saucy, bombshell character. All the four women co-star of the show including McClanahan, Bea Arthur, Betty White and the comparatively newcomer actress Estelle Getty won Emmy Awards for their respective roles in the sitcom.

After seven seasons Bea Arthur left the show and the other three again united for a brief spin-off in ‘The Golden Palace’ (1992). ‘The Golden Palace’ concluded in 1993 only after one season. Over the next decade, McClanahan performed in a series of special appearances on television sitcoms and dramas. Notable among these are ‘Boy Meets World’ and ‘Law & Order.’ In the 2005-2006 season, she also performed in Broadway including portraying the character of Madame Morrible in the musical hit ‘Wicked’ replacing Carole Shelley. She played the role for eight months from May 31, 2005, to January 8, 2006, before being replaced by Carol Kane on January 10, 2006.

Rue McClanahan penned her autobiography titled ‘My First Five Husbands ... and the Ones Who Got Away’ and published it in 2007. ‘The Golden Girls’ was awarded the 'Pop Culture' award at the Sixth Annual TV Land Awards in June 2008. McClanahan went to receive the award along with her two co-stars Bea Arthur and Betty White. Her final appearance was in the cable series ‘Sordid Lives’ on the Logo network. She played the character of Peggy Ingram in it. It was premiered on July 23, 2008.

Rue McClanahan married six times over the course of her life. She narrated the details of all her six marriages and the romances associated with each marriage in her autobiography ‘My First Five Husbands ... and the Ones Who Got Away’.

She was diagnosed with breast cancer in June 1997. She was treated successfully after fighting the disease for several years and entered full remission. However, in 2009 she underwent triple bypass surgery after suffering some heart complications. While recovering from the surgery, she suffered a minor stroke. She recovered briefly with reportedly normalcy restored in her speech. On June 3, 2010, she suffered a brain hemorrhage and died at New York–Presbyterian Hospital at the age of 76.

Rue McClanahan was an animal welfare advocate and one of the first celebrity supporters of PETA (People for the Ethical Treatment of Animals). She was a vegetarian by choice. She also had her political views and was a liberal Democrat. She wholeheartedly supported Barack Obama during the 2008 Presidential Campaign and compared his integrity with the legendary American President Abraham Lincoln.