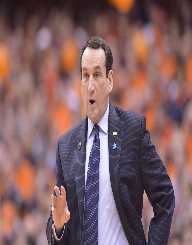 Mike Krzyzewski famously called “Coach K” is an American legendary basketball coach born on February 13th, 1947. He has coached the Duke and the US men's Olympic basketball team. The famous player Grant Hill was among the team members of Duke at the time he was their coach. The graduate of West Point set history as a basketball coach with 1000 career wins as of January 25th, 2015. This s when the team he was coaching Blue Devils won against St. Johns. He is a proud father of three daughters.

Mike Krzyzewski was born on February 13th, 1947. His place of birth was in Chicago, Illinois in the United States. He is the son of William Krzyzewski and Emily who were Polish American Catholics. Therefore, they raised Mike as a Catholic.

Mike Krzyzewski schooled in St. Helen Catholic School in Ukrainian Village situated in Chicago. Later, he joined a Catholic prep school meant for boys namely Archbishop Weber High School situated in Chicago. Subsequently, he has admitted to United States Military Academy located at West Point in New York. He graduated from the academy in 1969 and trained to join the United States Army as an officer. During this time, he joined Bob Knight’s basketball team at West Point.

During his senior years at the basketball team of the Army, he was appointed as captain. This was between 1968 and 1969. After that from 1969 till 1974, he directed service teams while serving in the US Army.

In 1974, Mike Krzyzewski officially began his basketball coaching career. He joined Indiana University where he assisted coach Bobby Knight. The following year he was the head at his alma mater.

In 1980, Mike Krzyzewski had a golden opportunity to coach at Duke University. In his first three years as head coach, he led the team to 38-47 scores. From 1983 till 1984, Duke Basketball Team led in 24 games.

During the Olympics, Mike Krzyzewski has won gold medals for three consecutive times for the National team. Also, in the World University Games in 1987, he won a silver medal. Later in 1990, he also won a bronze medal in the FIBA World Champions. In the same year, he won a silver medal at Goodwill Championship. In the FIBA World Championship in 2006, he won a bronze medal and other medals in the following years.

Mike Krzyzewski is known to be a philanthropist from his humanitarian contributions. Together with Carol his wife, Mike has contributed over the years to supporting Children's Miracle Network. He has also supported the Duke Children's Hospital and the V Foundation for Cancer Research. As a result, in 2012, he was presented with the Wayman Tisdale Humanitarian Award from the U.S. Basketball Writers Association. This was in honor of his charitable contributions and impacting positively on the society.

Mike Krzyzewski tied the knot in 1969 to Carol Marsh. This was the same day as his graduation. The couple s blessed with three daughters. They also have grandchildren. Together with his family, they founded the Emily Krzyzewski Center in 2006. This is a non-profit firm situated in Durham. The main aim of this organization is to inspire students to have big dreams and work towards achieving those dreams.