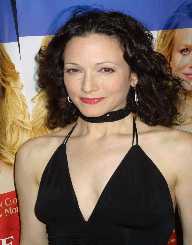 American actor, dancer, and singer Bebe Neuwirth were born Beatrice Neuwirth on the 31 December 1958 to Lee and Sydney Neuwirth in Princeton, New Jersey.

Bebe Neuwirth graduated from Princeton High School (1976) and then enrolled at the Juilliard School of Performing Arts (1977).

Initially working as a dancer, she performed with the Princeton Ballet Company. In 1980, she made her debut on Broadway playing the role of Sheila in a production of A Chorus Line.

Bebe Neuwirth won a 1986 Best Actress Tony Award for her portrayal of Nikki in Sweet Charity and 1997  Tony Award for Best Actress for her role as Velma Kelly in Chicago. In 1990 and 1991, she was awarded a Primetime Emmy: Outstanding Actress in a Comedy Series for her portrayal of Lilith Sternin in Cheers. She also was awarded the Seattle Film Critics Award for Best Supporting Actress for Tadpole (2000).

Bebe Neuwirth married Paul Dorman in 1984, and they divorced in 1991. Her current partner is Michael Danek.