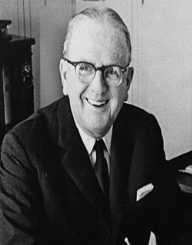 Norman Vincent Peale was born on May 31, 1898. He was an American minister and author. He was also a Pastor. He died aged ninety-five years old.

In 1922, he was ordained a Methodist minister. In 1932, he changed to the Reformed Church in America. He, later on, served as a pastor in Marble Collegiate Church, New York.

In 1935, Norman Vincent Peale started ‘The Art of Living’ which was his radio programme which aired until 1989. He was later sponsored by the National Council of Churches which landed him into television. During this time, he was editing the magazine titled Guideposts. Peale’s sermons had monthly mailings.

He later alongside four other people founded the board of an organization that helped executives and unemployed managers named ‘40Plus’. He alongside his psychoanalyst partner Smiley Blanton established a psychiatric outpatient clinic beside the church. In 1940, they wrote books such as ‘Faith is the Answer; A Psychiatrist and a Pastor Discuss Your Problems.’

In 1945, Norman Vincent Peale alongside his wife and Raymond Thornburg founded a non-demonitional forum that related inspirational stories. In 1947, he was the co-founder of The Horatio Alger Association which dealt with recognizing and honoring Americans that faced difficulties and were successful.

In 1951, he became the President of the recently formed psychiatric outpatient clinic which became American Foundation of Religion and Psychiatry. In 1952, he wrote a book titled ‘The Power of Positive Thinking’ which had the highest sales. In 1964, he became the main subject of ‘One Man’s Way’ film. He was a Scottish Rite Freemason.

In 1984, President Ronald Reagan honored Norman Vincent Peale with the honorary Presidential Medal of Freedom due to his theological contributions.

Norman Vincent Peale married Ruth Stafford Peale. He died on December 24, 1993. He died of a stroke in Pawling, New York.