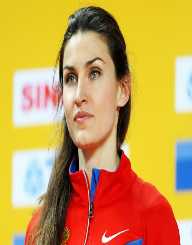 Anna Vladimirovna Chicherova was born on July 22, 1982, in Yerevan, Soviet Union. Her family had a background in professional sports, and her father was a professional high jumper. Inspired by her father, she began training in high jumping when she was seven years old.

Anna showed major talent in her training sessions. However, after the Soviet Union collapsed, she and her family had to move to a small town, Belaya Klitva in Rostov. There she continued her training under the tutelage of Alexei Bondarenko since her father had to work to support the family.

When Chicherova was 16 years old, she joined the Russian Sports Academy, which allowed to start her professional career. Alexander Fetisov trained her. Chicherova’s effort garnered her the gold medal at the 1999 World Youth Championships in Bydgoszcz, Poland, where she jumped 1.89 m. The following year, she participated in the World Junior Championships, where her 1.85-meter jump won her the 4th place.

Although Chicherova was showing good results, her personal best in 2002 was 1.92 meters- only 3 cm higher than her gold medal winning score in 1999. For this reason, she decided to change coaches and began working with Yevgeny Zagorluko.

The change in coaches turned out to be a success. Already in 2013, Anna improved her personal best to 204 cm- a result that garnered her the victory at the Christmas Cup in Yekaterinburg. The same year she participated at the World Junior Championships in Birmingham, where she jumped 1.99 m and won 3rd place. The same year she won the Military World Games in Catania, Italy with 1.89m.

Chicherova continued her success in 2004 when she won the silver medal at the World Indoor Championships in Budapest, Hungary, where she jumped 2.0 meters. She qualified for the 2004 Olympic games. Her performance was not very good, and Chicherova finished in 6th place. Chicherova started out the year 2005 with winning the gold medals at the European Indoor Championships in Madrid, Spain, and Universiade in Izmir, Turkey.

In 2007, Chicherova participated in the World Championships in Osaka, Japan, where she won the silver medal with her 2.03 m jump. She qualified for the Beijing Olympics and won her first Olympic medal- bronze- with a 2.03 m jump. The following year, she once again stood on the podium at the 2009 World Championships in Berlin, Germany, winning a silver medal with 2.02 m jump.

Chicherova was one of the leading high jumpers in the world. She missed out the 2010 season completely due to her pregnancy. However, the following year she came back swinging, winning the World Championships in Daegu, South Korea, with her 2.03 m jump.

Chicherova’s biggest career achievement came in 2012, when she won the gold medal at the 2012 London Olympic Games, jumping 2.05 meters. In 2013, she won bronze at the World Championships in Moscow.

Chicherova is currently the member of the Russian Army Athletics Club in Moscow. She is married to Gennadiy Chernovol, who is also a professional athlete. Their daughter Nika was born in 2010.

After winning the Daegu World Championships and London Olympic Games, Chicherova became only the third female high jumper in history to hold both of these titles.