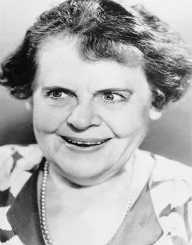 Leila Marie Koerber best known Marie Dressler was a talented Canadian-American stage and screen actress and a comedian. Born on November 9, 1868, her spectacular acting skill made her a film star during the Depression-era. Her stage works encompassed vaudeville, and comic operas and her success in that led to a film debut. Marie Dressler started acting on stage by traveling with theatre troupes at age 14 and made a Broadway debut in 1892 relying on her comic prowess, not her looks.

Marie Dressler appeared in the first full-length film comedy in 1914. In 1931, Marie Dressler won an Academy Award for Best Actress for Min and Bill. Dressler’s acting career declined in the 1920’s but was able to relaunch it in 1927 and achieved successes afterwards. She was named a top film still in 1932 and 1933.

Born as Leila Marie Koerber, Marie Dressler  was born on November 9, 1868, to Alexander Rudolph Koerner and Anna nee Henderson in Cobourg, Ontario. Alexander was an Austrian and an officer during the Crimean War and Anna was a musician. Leila father later became a music teacher in Cobourg and organist for the St Peter’s Anglican Church. The family moved to communities during her childhood age. As the daughter of a music tutor, Laila became interested in music and started singing at the St. Peter’s Anglican Church. The family later moved to the United States in the 1870s. There, Alexander taught piano between the late 1870s and early 1880s in Bay City, Saginaw and Findlay, Ohio.

Marie Dressler  was a child actor and at age five, appeared in Cupid, a church theatrical performance in Lindsay, Ontario. Marie Dressler since appeared in several other amateur productions, according to accounts of residents who were close to the Koerber family. Marie Dressler started her acting career at age 14, by leaving home to join the Nevada Stock Company, where she actually lie to be 18 years. He payment during this time was about $6 or $8 per week, of which she sent half to her mother each time. It was during her professional career that she picked the name Dressler, which Marie Dressler  claimed to be her aunt's name though it was never confirmed. She also claimed her father prevented her from using the name Koerber for her career.

Marie Dressler described The Nevada Stock Company as "wonderful school in many ways. Often a bill was changed on an hour's notice or less. Every member of the cast had to be a quick study". He professional debut with the company was in the play Under Two Flags where Marie Dressler  played as a chorus girl called Cigarette. Marie Dressler  remained with the company for three years before joining the Rebert Grau Opera Company, where Marie Dressler received $8 per week but she claimed she received no wages. The company toured the Midwest area but would later leave to join the Starr Opera Company in Philadelphia as a member of the chorus. Her highest moment with the company was when she played in The Mikado as Katisha when the regular actress had a sprained ankle. In 1887, she also played Princess Flametta in a production in Ann Arbor, Michigan.

Marie Dressler later joined the Bennet and Moulton Opera Company, where she remained for three years for roads and playing roles in light opera. He left in 1891, for Chicago after gaining substantial popularity. While there, Marie Dressler  was cast in Little Robinson Crusoe as well as The Tar and the Tarter. She moved to New York City after the tour production of the latter. There, Marie Dressler  made a Broadway debut in Robber of the Rhine at the Fifth Avenue Theatre in Waldemer in 1892. The following year, she was cast in Duchess in Princess Nicotine. As her popularity grew, her purse also became fatter as she was receiving $50 a week at this time. Dressler never forgot her parents as she kept on sending them money.

Her first starring role was in 1896 when she played Flo in George Lederer’s, The Lady Slavery at the Casino Theatre on Broadway. The play which also starred British dancer, Dan Daly, became very successful at played for two years in the Casino. During this period, Dresslerwas trademarked for her comical facial expressions, seriocomic reactions and double takes. Marie Dressler  was able to acquire enough money from the play that, she bought a house for her parents in Long Island. Marie Dressler  was blocked by the Erlanger syndicate from appearing on Broadway and therefore chose to join the Rich and Harris touring company. She later returned to Broadway to play in Hotel Topsy and The Man in the Moon.

Marie Dressler ounded her own theatre troupe in 1900 for the production of Miss Prinnt, which became a failure after running in cities in the northeastern US. This forced her to declare bankruptcy. Marie Dressler was contacted by Weber and Fields Music Hall management to sign a three-year, $50,000 contract to play lead roles in Higgeldy Piggeldy and Twiddle Twaddle. She started to perform vaudeville in New York, Boston and other cities after the contract ended. Dressler, performed in several other Broadway productions and joined several other tour troupes before moving into film acting.

Marie Dressler  made a debut role in afeature film in 1914 in the silent film Tillie’s Punctured Romance a production by Mack Sennett studio. The movie also starred Charlie Chaplin and Mabel Normand. The production became a hit and played in two other sequels of the film. Marie Dressler  played in other comedic productions but started to have lesser roles that she announced her retirement from showbiz. Being depressed Dressler even contemplated suicide in 1927. With this, she was given a lesser role in The Joy Girl by film director Alan Dwan. Seeing Dressler in her professional low-point, a screenwriter with MetropGoldwyn-Mayer (MGM), Francis Marion came to her rescue by convincing MGM's production chief, Irving Thalberg to get her back to the screens.

Her debut with MGM was in The Callahans and the Murphys in 1927. The film initially became successful but further productions were dropped due to its portrayal of Irish characters that caused some protest from the Irish World newspaper. In 1928, she appeared in The Pasty by MGM. Marie Dressler  was then given a role in the sound film Anna Christie in 1930, through which Marie Dressler received praises from critics leading to MGMto give her $500 per week contract. With this contract, she appeared in several other productions becoming Hollywood’s number one box-office attraction.

Marie Dressler  married an American, theatrical manager, George Francis Hoepperton May 6, 1894, according to her biographer, Mathew Kennedy. This marriage gained her a US citizenship. She later met a Maine businessman, James Henry Dalton in 1907 who she married until his death on November 29, 1921. This marriage was, however, a staged one by Dalton as the minister who even officiated the ceremony was a local man paid by his to take them through the process. Dalton had claimed to be divorced in 1905, but his first wife Lizzie Augusta Dalton claimed that was false.

After Dalton’s death, Marie Dressler planned to bury him but Lizzie had him buried on the Dalton family plot. Dressler died of cancer on July 28, 1934, at age 65 in Santa Barbara, California. She was interred in a crypt in the Great Mausoleum in the Forest Lawn Memorial Park, Glendale, California. Most of her estate which was worth $310,000 went to her sister Bonita. She also allotted her maid for 20 years, Mamie Cox $35,000 and her 1931 automobile. Mamie’s husband, Jerry Cox, who also served as Dressler butler for four years was given $15,000.