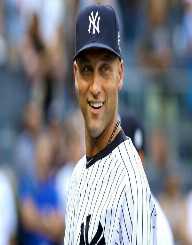 Derek Sanderson Jeter was born on June 26, 1974, in Pequannock Township, New Jersey. His mother was an accountant, and his father-a substance abuse counselor. His parents met while serving in the United States Army in Germany. His father also used to play baseball, but his sister was a softball star when she was in high school.
The family moved from New Jersey to Kalamazoo, Michigan when Derek was four years old. He still spent the summer holidays in New Jersey with his grandparents, who took him to New York Yankee games. This inspired him to become a baseball player.

Jeter went to Kalamazoo Central High School, where he played basketball, baseball and ran cross country. He had high batting averages during this period. In his senior year, Jeter batted .508 and compiled 23 runs batted in RBI. During his senior year, he was included in All-State honorable mention, Kalamazoo Area award for Scholar-Athlete and the 1992 High School Player of the Year Award. The University of Michigan was interested in him and offered a scholarship to play college baseball for the Michigan Wolverines.

After graduating from High School, Jeter went to play at Michigan University All-star camp, where a New York Yankees scout saw him. Jeter enrolled at Michigan University but soon decided to turn to professional baseball. The Yankees selected him in 1992 draft. Jeter was quickly rising in the team, and in 1994 his score of batting .344 with 50 stolen bases won him the honor of Minor League Player of the Year.

In 1995 Jeter made his big-league debut after the Yankees shortstop Tony Fernandez was put on a disabled list. The following season was his first full Major League Baseball season. He batted .314 with ten home runs. The same year, the new talent of Yankees helped the team win the World Series. In 1996, Jeter won the American League Rookie of the Year Award.

In 1998, Jeter was selected to the All-Star game. He has selected an All-Star a total of 14 times in his career. In the year 2000, Jeter became the first baseball player in history to be named All-Stare Game and World Series Most Valuable Player. Jeter has been widely known for his inside-out swing and jumps throws that are quite acrobatic. He was known as a player who works best under pressure. In 2003, he was named the captain of New York Yankees.

In 2003 season, Jeter suffered his first major injury. In a collision with another player, he separated his shoulder. He quickly returned to the game with no permanent disabilities. In 2004, Jeter won the Gold Glove award for his excellence in the field. In 2009, Jeter passed baseball legend Lou Gehrig with a 2,722nd hit -the most in the history of the franchise. The same year he also won the fifth world championship ring.

In 2013 season, Jeter injured his ankle and was limited to only 17 games. He announced that he would retire after 2014 season after spending 20 seasons in the Major League. He finished his career with .310 lifetime batting average and had 3,465 hits, which ranked him the sixth in long league history.

Jeter continues to reside in his home in Marlboro Township, New Jersey. He also used to own a penthouse apartment in Manhattan’s Trump World Tower.

Since his rookie year, Jeter’s personal life has been a major topic for gossip. He had a relationship with singer Mariah Carey, model Vida Guerra, Miss Universe Lara Dutta and several other celebrities. The team owner George Steinbrenner often criticized him for staying out too late during the season and not focusing on the sport. In 2015 Jeter engaged to model Hannah Davis, and the couple married in 2016.

In 2013, Jeter partnered up with Simon & Schuster to form an imprint called Jeter Publishing. The company publishes nonfiction books for adults, as well as children’s books. He also opened the website ThePlayersTribune.com- a media platform to present the voice of professional athletes. His idea was to let professional athletes communicate with their fans through articles, videos, and podcasts, without a filter. He is also planning to open a restaurant, named after his website. He has also invested in several businesses and was exploring to purchase Buffalo Bills football team. In 2006, Jeter signed a deal with cosmetic’s company Avon, to create a fragrance named Driven.

In 1996, Jeter formed the Turn 2 Foundation, a charity organization to help children and teenagers to avoid drug and alcohol addiction. For the work in his foundation, Jeter received an honorary doctorate from Siena College. He is also an ambassador for Weplay- a website to encourage children to get involved in sports.