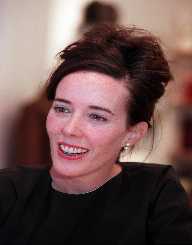 Kate Spade was the fashion designer who gave the handbag the niche as a fashion item for elegant women.

Kate Spade's maiden name was Katherine Noel Brosnahan. Her birthday is documented as having being born on December 24, 1962. Born and raised in Kansas, Kate was born into the family of Earl Francis and Jane Brosnahan. Kate Spade went to St. Teresa’s Academy during her high school days. Afterward, she enrolled at the University of Kansas.

After a brief period, she transferred her studies to Arizona State University. In 1985, she graduated in with a Bachelor degree in Journalism at the age of twenty-three years.

The following year, Kate Spade started working at a local fashion store called Mademoiselle. At the Manhattan-based store, Spade had an insight into the world of women accessories.

As a fashion designer, she discovered that most elegant women never took notice of the need to accessorize with stylish handbags. Her zeal made her rise from the post of fashion designer upward. By the time she was leaving Mademoiselle, Spade was the chief officer heading the accessories section.

Four years of working at Mademoiselle gave Kate Spade the confidence to start her venture. She paired up with Andy Spade and founded their business. Andy Spade would later become her husband. With the humble beginnings in 1991, Spade made fast forays into the business world.

After five years of operating the small enterprise, Spade started her major store. In 1996, the Kate Spade Handbags got opened. It was located in the Manhattan, New York. Her store attracted elegant women and the wealthy in New York. The handbags were stylish and had sophisticated graphic patterns. Due to the demand in her products, Spade expanded to incorporate other feminine products.

The store changed its name in 2004. With the new name Kate Spade at Home, the store added more household products on the shelves. Having started with handbags, then clothing apparels, Spade added beauty items and home decoration items. Kate Spade at Home had become a one-stop shop for the elegant women in New York.

After having made a brand of her store, the expansion process began. Kate Spade opened other store outlets across the US. Within five years of rebranding into a one-stop shop, Kate Spade at home ventured into the global market. Spade first took her business entity to Japan.

The business later went into the production of footwear and handbags in 2006. Under the name Frances Valentine, Spade continued to provide solutions to the fashion appetite of the young ladies of New York.

To grow the business, Kate Spade had to partner with a reliable organization. In 1999, she sold part of the company’s shares to Neiman Marcus Group. With the acquisition of 56% of the stake in Kate Spade, the outlet had access to the high-end market in New York and other major cities in America. Spade relinquished the 44% of the company to Neiman Marcus Group in 2006. Kate Spade was sold twice after, in 2006 and 2017.

Throughout the takeover process, Spade was still part of the brand. She maintained her role at the helm of Tapestry Incorporated. This was the umbrella company having in it three entities, including Kate Spade New York.

During her active life, Kate Spade was feted on several occasions. The Council of Fashion Designers of America honored her twice, in 1996 and 1998. Her work was on display at the Cooper Hewitt Museum in 1999. She again got three design prizes from different organizations in 2004. Her former university inducted her name into its Entrepreneur Hall of Fame in 2007.

Kate Spade was married to Andy Spade in 1994. The couple had a daughter called Frances. The only daughter was born in February 2005.

The fashion world was shocked by her death on June 5, 2018. The official report gave suicide by hanging as the cause of death. She was only 55 years.

Kate Spade revolutionized how women looked at the simple handbags. Her ingenuity transformed the little carry-on, to an object into a sense of a fashion statement for all. It was ironical that such a brilliant mind would pass away at the tender age of just 55 years.