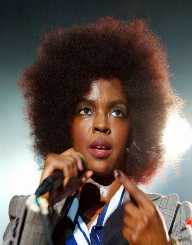 Lauryn Hill was born on May 26th, in 1975. She is celebrated for being an American singer, rapper, songwriter, actress and a record producer. In the music industry, Hill enjoyed her first taste of success for being the member of Fugees, a hip-hop trio group. What makes Hill unique is the fact that she tries her best to stay away from the limelight.

Lauryn Noelle Hill was born on May 26th, in 1975. Her place of birth was in East Orange, in New Jersey. She is the daughter of Valerie Hill, an English teacher. Hill has an older brother called Malaney who is only three years older than her.

Growing up, Hill was exposed to numerous record tracks that greatly inspired her to pursue a career in the music industry. While she was young, her parents were music fanatics as her father sang while he mother played the piano. Some of Hill’s favorite musicians when she was young included the likes of Aretha Franklin, Stevie Wonder, Curtis Mayfield and several others.

Lauryn Hill went to Columbia High School. Here, she honed her singing talent for she was a cheerleader. Similarly, she took dance classes alongside violin lessons. She was seen by the school’s teachers as a different lady that would take the lead in everything she did in her life.

It did not take time before Lauryn Hill would want to try out her luck in the film industry. As such, she began taking acting classes in Manhattan. Her acting career took off in 1991 where she made an appearance in Club XII. This was merely a play that did not earn her much fame. Nonetheless, it exposed her acting talent and was immediately noticed by an agent. Shortly after, she featured in As the World Turns (1991). She had landed on the role of Kira Johnson in this television series.

After graduating from Columbia High School in late 1993 the following year, Lauryn Hill was a member of The Fugees. This was a group made up of Jean, Pras, and Hill. The three decided to rename their group to the Fugees simply because they had derived the name from “refugee.” The group landed themselves a recording contract in 1993 with Ruffhouse Records. What made them unique was their soul, rock, and reggae blend that they brought into their music.

In 1994, the Fugees released their first album called Blunted on Reality. This album performed well as it was ranked at number 62 on Billboard charts during its first year of release. Nevertheless, regarding sales, the album performed dismally.

In 1996, the trio released The Score as their second album. Unlike their previous work, the album topped the U.S. Billboard charts. Over the rest of the year, the trio enjoyed immense success as the album was highly ranked for more than six months. In the United States alone, the album grossed over six million copies. The album garnered Lauryn Hill and her friends a Grammy Award for the Best Rap Album. Similarly, it also received recognition from the Rolling Stone magazine.

Lauryn Hill is a mother of six children. Her five children were from her marriage to Rohan Marley, the son of Bob Marley.