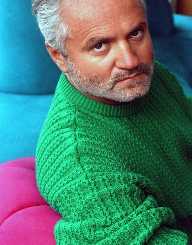 Gianni Versace was born on December 2, 1946, in Reggio Calabria, Italy. His siblings are Santo and Donatella, who worked in fashion with him.

Growing up, Gianni Versace’s mother owned a dressmaking business. He worked at his mother’s shop after high school for some years. Then, in 1972, Versace moved to Milan, where he began working as a freelance fashion designer for several different fashion companies, including Complice.

In 1978, Gianni Versace made his first clothing line for women. Around the same time that he did this, he started working alongside his brother and sister, Santo and Donatella. In this same year, the Gianni Versace company was officially created. In his designs, he used vibrant colors and creative patterns.

In the early 1980’s, Gianni Versace began designing costumes for production companies (while still designing clothing for everyday wear). Some of the plays that Versace’s costumes appeared in during the 1980’s include Salome, Chaka Zulu, and Dionysus. In the 1990’s, Versace's fashion empire continued to expand. He opened one of his first boutiques in Germany in 1994. He also had his first solo fashion show in 1995 in New York City, New York, USA. Also during this decade, Versace focused on writing various fashion books, which were later translated into various languages and sold around the world.

Throughout the 1990’s, Gianni Versace published some fashion books. Many of these books were either filled with pictures of his designs or were autobiographical in nature. Most of his books were co-written with others as well. Some of his most famous books are listed below.

All of Versace’s awards and accomplishments are due to his skills with fashion. Some of his most impressive awards are listed below.

Gianni Versace was awarded the Order of Merit of the Italian Republic for his contributions to fashion.

Gianni Versace began dating Antonio D'Amico in 1982. The couple was together until Versace's death in 1997.

Gianni Versace was murdered on July 15, 1997, in Miami, Florida, USA. His murderer was a serial killer named Andrew Cunanan. It is still unknown why Cunanan killed Versace. As Cunanan killed himself shortly after murdering Versace, the world may never know what was his motivation for killing Versace was. Versace was only 50 years old when he passed away.

Many films and docudramas have been made about Gianni Versace’s life since his death. Some of the films include The Versace Murder and House of Versace.

Elton John’s The Big Picture album is dedicated to Versace.

The Versace fashion company still exists and Gianni’s sister, Donatella Versace, is one of the leading members of the company. She works as the creative director. Santo Versace is the current CEO of the company.