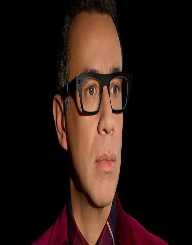 Fred Armisen was born 4th December 1966, to Fereydun “Fred”andHildegardtArmisen. He was born in Hattiesburg, Mississippi, in the United States. Shortly after his birth, the family moved to New York, which is where he grew up. His father worked for IBM, and his mother was a teacher. Armisen studied at the School of Visual Arts, based in Manhattan, but left before graduation to become a drummer in a rock band.

Fred Armisen began his musical career in 1984 when he played in a band with some high school friends, but they didn’t last long.

In 1988, Armisen moved to Chicago. He joined Trenchmouth, a local punk rock band. In the 1990s, he played drums with Blue Man Group. From 2007 to 2015, he played on several tracks for different artists including Les Savy Fav, Matthew Sweet, and Wandering Lucy.

Towards the end of the 1990s, Armisen's attention moved to acting. He was still playing with Trenchmouth but thought acting would be a good option.

In 1997, Armisen's television career was launched with the program, Reverb. He was the interviewer for the show, which was a music program for new and emerging artists, and the show went on tour with them. Viewers were taken backstage, onstage, and even viewed from the audience. The show ran for four years, and Armisen did 82 episodes.

During the same period, he ventured into movies as well, releasing two short films.

In 2002, Armisen won a role on Saturday Night Life. His talent was in comedy, and he was so popular, that two years later, in 2004, he became a regular cast member. He was with the show until 2013, filming 220 episodes.

In 2014, Armisen joined theLate Night with Seth Meyers show, as the bandleader of the show’s resident musicians, 8G Band.

With his music, he released 26 albums between 1984 and 2013. Two of the albums were with The KGB, 11 with Trenchmouth, one with Crisis of Conformity, and two with Ian Rubbish and The Bizzaros.

Between 1998 and 2018, Armisen appeared in 48 movies. Some were short films, many were mainstream movies including, The Ex (2006), Baby Mama (2008), and Zoolander 2 (2016). Many of his roles were small parts. Some of his movie appearances have also been voices for animations, including four Smurf movies, and doing the voice of Speedy Gonzales in Looney Tunes: Rabbits Run.

With his television work, Armisen has appeared in over 70 series and shows. He has done everything from variety and talk shows to animations, to sitcoms and television movies. One of his regular shows was Looney Tunes, where he did 30 episodes. Armisen has also done voice work for several video games.

In 1998, Fred Armisen married Sally Timms, an English singer, and songwriter. The couple divorced in 2004.

Armisen has been in a relationship with another actress, Natasha Lyonne, since 2014.