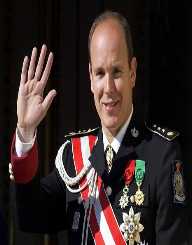 Prince Albert ΙΙ, officially known as Albert Alexandre Louis Pierre Grimaldi is the ruling monarch principality of Monaco. He ascended to the throne on 6th April 2005.  This is following the death of his father, Prince Rainer ΙΙΙ who had a strong political power in the second smallest country in the world.

Prince Albert ΙΙ was born on 14th March 1958 to the royal family of Prince Rainier III. His wife is Grace Kelly an American Actress and movie star. He has two siblings, Princess Caroline and Princess Stephanie.

He has an ancestry from France, Germany, Britain, Ireland, United States and Monaco with Queen Victoria Eugenia of Battenberg as his godmother and Prince Louis of Polignac as his godfather.

Albert attended the prestigious Lycee Albert Premier high school from which he graduated in 1976. He spent one-year training in various princely duties and 1977; he enrolled at Amherst College in western Massachusetts. It was in this college that he studied economics, music and English literature.

In 1979 he undertook an exchange program with the University of Bristol at the Alfred Marshall School of economics and management. Later, in 1981 he graduated with a Bachelor’s degree in political science.

On 7th March 2005, his father Rainier was admitted to a hospital and was later moved to an intensive care unit owing to breathing, kidney and heart problems. His father’s health condition significantly deteriorated and was unable to exercise his sovereign duties. On 31st March 2005, Prince Albert was announced the hereditary prince to take over his father’s duties due to his critical illness. This was a decision that was made by Crown of Councils of Monaco upon which he spent his first day as a reagent caring for his father.

On 6th April 2005, Ranier III died, and Prince Albert II was enthroned as ruler of the principality on 12th July 2005. He is the 32nd in the line of rulers in Monaco principality and the only male heir to the throne. Bordered by France and the Mediterranean Sea he has strong political power in the second smallest country in the world. This country is a major banking center and home to the world’s richest and most famous people.

In 2006 he created ‘Prince Albert II of Monaco Foundation.' With this foundation, he has strengthened environmental awareness by encouraging sustainable use of planets resources. Also, the foundation explores solutions to global climate change and environment issues.

In 1996 Prince received the 'Eagle' award from United States Sports Academy for his significant contributions in promoting international harmony, peace, and goodwill through effective use of sport.

In 2009 he was awarded the ‘Roger Revelle Prize’ by Scripps Institution of Oceanography for promoting understanding and awareness of the environmental challenges. On October 2009, he honored with ‘Teddy Roosevelt Medal’ at the United States Congress for his dedication in the field of environmental protection.

In July 2011 he married former South African swimmer Charlene Wittstock at the age of 53. This was after their engagement announcement on 23 June 2010. The wedding took two days: civil marriage took place on 1st July 2011 followed by a religious marriage on 2nd July 2011. Before the wedding, he received much press attention for his perpetual bachelor status and dating popular models and actresses.

As an avid sports enthusiast, Albert participated javelin throwing, county crossing, handball, judo, swimming, tennis, fencing, skiing, squash, and sailing. It took him five consecutive Olympics to complete the bobsleigh for Monaco. Most of these achievements took place in the years 1988-2002 games where he also served as the flag bearer in three of the games.

He has been a member of the international Olympic committee since 1985 and hard the opportunity to attend the Paris-Dakar Rally.

Prince Albert II is among the wealthiest royals in the world with a net worth of more than $ 1 billion which includes land in Monaco and France and his real estate with holdings in Societe des bains de Mer de Monaco which operates in the famous Monte Carlo casino and other entertainment properties in Monaco.