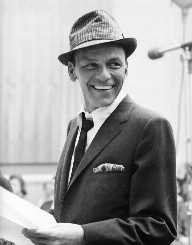 Frank Sinatra was one of the most famous singers in the 20th century. He was also an Academy Award winning actor that us respected by American audiences for decades. He was an individual who has sold 150 million records worldwide. He is known to have entered show business in the 1930s and had his last performance in 1990s. During his impressive career, he has entertained a lot of persons with his melodious voice and acting skills. Frank Sinatra is also known to be a charismatic personality that is highly responsible and understanding. He was rowdy and unruly while he was in school and dropped out without graduating. Being a famous singer and critically acclaimed actor, he is considered to be one of the greatest entertainers in American history.

Frank Sinatra was born to Antonio Martino Sinatra and Natalina Garaventa. He was the only child of his parents who were a firefighter and amateur singer respectively. He was a loud and unruly fellow who got expelled from high school. He chose to run after his love, music as he always wanted to be a professional singer. He, however, became a professional singer in his teens.

His career started in a performance at night clubs after leaving school before he joined The Three Flashes in 1935. This was renamed to the Hoboken Four. As a band, they all appeared in Edward’sBowes Show Major Bowes Amateur Hour. As time goes on, everything changes for him and later joined Tommy Dorsey and his Orchestra. This gave his career a boost and became a very successful person. His relationship with Tommy Dorsey became sour, and in 1942, he left the band. The same here, Frank Sinatra released his first studio album, The Voice of Frank Sinatra. This album peaked on the Billboard Charts for a good seven years. Later, he released Songs by Sinatra, Christmas Songs by Sinatra, Frankly Sentimental and Dedicated to You. None of these albums were as successful as his first album.

Frank Sinatra, however, came to the limelight again with his album Nice n Easy. This album peaked the Billboard by reaching the No. 1 position. It spent a good nine week there and even got nominated for a Grammy Award. He later went creative with his album Watertown in 1970. This album which talks about the tragic story of a man who was left by his wife for a big city. The album got mixed reviews after the release. He also recorded a duet, Something Stupid with daughter Nancy and this got to number one position on the Billboard and stayed there for four weeks.

THE LIFE OF AN ACTOR

In the 1940s, Frank Sinatra ventured into Hollywood and acted in a film From Here to Eternity. He later acted in a World War II adventure film Von Ryan’s Express in 195. This film is all about a group of Allied prisoners who attempt a daring mass escape after Italy’s Armistice with the Allies. He also played a notable role in Four For Texas, Sergeants Three and Robin and the Seven Hoods. Frank Sinatra announced he was in retirement in 1971, but he could not find the mind to stay away from his love, music. He was later found in the show business again and appeared in many movies and produced albums.

His solo debut was a major hit and established him in his solo career. This album reached the No. 1 spot of Billboard chart. The 1958 album, Frank Sinatra Sings for Only the Lonely, was considered to be his favorite.

Frank Sinatra married Nancy Barbato in 1939 but divorced her in 1951. She had three children for him. Later, he married a second wife whom he divorced in 1957 after almost six years of marriage. Between 1966 and 1968, he married and divorced Mia Farrow to pave the way for his final marriage in 1976. The couple remained as one till death do them apart. He died in 1998 at the age of 82 after suffering from some health problems. These problems include High blood pressure and bladder cancer.