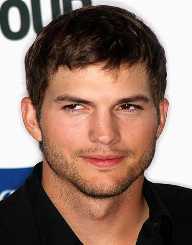 Ashton Kutcher is an actor, producer and a model.

Christopher Ashton Kutcher was born in Cedar Rapids, Iowa on 7th February 1978. His mother Diane (née Finnegan),  is of Czech, German and Irish descent, while his father Larry is of Czech origin. He has an older sister Tausha, and a twin brother Michael. Ashton is the older of the non- identical twins, and Michael has mild cerebral palsy.

Ashton considered suicide when he was thirteen so that his brother could have his heart. Shortly after his father persuaded him to change his mind, a transplant was available. The brothers are close, at one point Ashton kept himself busy so he couldn’t feel when Michael was diagnosed with cardiomyopathy.

Kutcher was raised in a "relatively conservative" Roman Catholic family. Later he became a student of Kabbalah, a form of Jewish mysticism.

Ashton Kutcher went to Washington High School in Cedar Rapids for his freshman year. He transferred to Clear Creek Amana High School after his family moved to Homestead, Iowa. It was where he developed a passion for acting. During his senior year, he was caught breaking into his high school to steal money with his cousin.

Ashton was convicted of third-degree burglary and sentenced to 180 hours of community service with three years of probation. Ashton’s conviction made him lose his girlfriend and college scholarships. When he was sixteen, his parents divorced.

Motivated by his desire to cure Michael’s heart problem, Ashton Kutcher enrolled at the University of Iowa in 1996, planning to major in biochemical engineering. He worked as a college summer hire in the cereal department for the General Mills plant in Cedar Rapids and sometimes sold his blood to fund his college fees. After that, he was scouted by a model scout at The Airliner bar in Iowa City.

Ashton entered the “Fresh Faces of Iowa” modeling competition and won first place. His win caused him to drop out of college, going to New York City to the  International Modeling and Talent Association (IMTA) Convention. He lost to Josh Duhamel in 1998 IMTA competition.

Ashton Kutcher signed with Next modeling agency in New York, he appeared in Calvin Klein commercials and modeled in Paris and Milan. He returned to Cedar Rapids after the convention but relocated to Los Angeles to pursue acting soon after.

Ashton Kutcher is most remembered as Michael Kelso in the television series That '70s Show, from 1998 to 2006, starring alongside current wife, Mila Kunis. Ashton starred in several comedy films, including Dude, Where's My Car?, Just Married, and Guess Who. He also had parts in other movies such as The Butterfly Effect and Cheaper by the Dozen, out of the comedy genre he is well known for. He also played Steve Jobs in movie Jobs (2013).

After accumulating experiences in acting, Ashton Kutcher started to produce his show in 2003. He runs a production company name Katalyst Films with Jason Goldberg, His first site was animated cartoon Blash Girls, and their first production was Punk’d, a prank show that MTV aired. He became executive producer of reality television such as Beauty and the Geek, Adventures in Hollyhood, and many more.

In 2013, Lenovo hired Kutcher as a Product Engineer. He was in charge of marketing of Yoga line of computer tablets by giving ideas in design, software, and usage scenarios. Ashton Kutcher is also a venture capitalist, successfully invested in several high technology startups: Skype, Foursquare, Airbnb, etc.

Ashton is a co-founder of the venture capital firm A-Grade Investments and Sound Ventures, the successor to A-Grade Investments managing a fund backed by institutional funding. He was part of management team for Ooma, a VOIP business start-up in 2007. He was the Creative Director who produced videos to promote the service.

In 2011, Ashton Kutcher launched his own Twitter client with UberMedia called A Plus; users must first have an UberSocial client installed. In 2014, A Plus morphed into a content platform that shares upbeat stories; it has been well received by social media users.

In 2009, Ashton Kutcher and Demi Moore established DNA Foundation, an international human rights organization. It was later known as Thorn; the primary address is the sexual exploitation of children and the proliferation of child pornography on a global scale.

In 2005, he married actress Demi Moore, who is fifteen years his senior. The marriage ended in 2012, citing irreconcilable difference. The divorce finalized in a year after.

Ashton then dated Mila Kunis, co-star in That 70’s Show; they became engaged in 2014. They have a daughter, Wyatt in the same year. Ashton tied the knot with Mila in July 2015, and Dimitri Portwood was born in 2016.