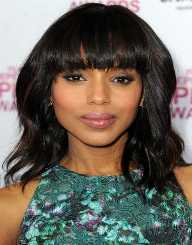 Kerry Washington was born 31st January 1977, to Earl and Valerie Washington. She was born in The Bronx, New York, in the United States. Her father was a real estate broker, her mother, a professor, and educational consultant.

Kerry Washington studied at the Spence School, based in Manhattan until she graduated from high school in 1994. She then enrolled in George Washington University and graduated in 1998 with a double degree in anthropology and sociology.

Kerry Washington's  career began with a debut on television. She appeared on the ABC Afterschool Special, Magical Make-Over, which was a television movie. She soon gained regular work and over the next few years appeared in shows such shows as NYPD Blue, Law & Order, and Boston Legal.

Kerry Washington  then moved into stage productions, and debuted on Broadway in 2009, in a production called Race.

In 2012, Kerry Washington  was cast as the lead in the television series, Scandal. At the time of writing in 2018, she is still in the role, and has acted in 124 episodes.

Washington  appeared in her second Broadway production, American Son, in 2018.

Washington  has been nominated for 47 awards, and she has won 16 of them. Her awards include four Black Reel Awards, and four NAACP Awards.

In 2013, Kerry Washington married Nnamdi Asomugha on, an NFL player. They have two children, a daughter, and a son.

Kerry Washington is an active supporter of the Women’s Cancer Programs of the Entertainment Industry Foundation.

She is also a supporter of LGBT rights, a member of the Creative Coalition, and a member of V-Day, which is a global organization that raises awareness to violence against females.