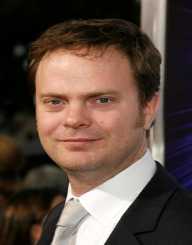 Rainn Wilson was born 20th January 1966, to Robert Wilson and Shay Cooper. He was born in Seattle, Washington, in the United States. ; Rainn Wilson's father was a novelist and artist, and his mother was an actress and yoga teacher. When he was very young, Rainn Wilson spent two years in Nicaragua, and once his parents divorced, they moved back to the U.S.

Rainn Wilson; studied at ShorecrestHigh School in Washington, where he began to play the clarinet and bassoon in the school band. The family was of the Baha’i faith, and they moved to Wilmette in Illinois where they served at the Baha’i National Center. Wilson transferred to New Trier High School at the time, and this was the high school he graduated from.

As a graduate, Rainn Wilson worked with The Acting Company in New York City. As a struggling artist, he made ends meet by driving a van. He started his career on the stage and working in theater for several years, and with different theater companies.

In 1997, Rainn Wilson won a role in One Life to Live, a television soap opera. He debuted in his first movie with a role in Galaxy Quest which was released in 1999. Wilson has continued to work, appearing in many well-known television series, and many movies. From 1997 to the present, Rainn Wilson has acted in 27 movies, including, Almost Famous (2000), Cooties (2014), and Shimmer Lake (2017).

He has also been in 25 television series, including Six Feet Under from 2003 to 2005, The Office from 2005 to 2013, and guest appearances in many other shows such as Law & Order, Monk, and Numb3rs. Rainn Wilson has written two books. Soul Pancake was released in 2010, and The Bassoon King was published in 2016. In relation to social media, Rainn Wilson established the YouTube channel called SoulPancake. The channel was sold in 2016 to Participant Media, boasting 2.3 million subscribers.

In 1995, Rainn Wilson married Holiday Reinhorn, a writer. The couple has a son called; Walter.

Rainn Wilson still follows the Baha’i faith, and he hosts a podcast and blog for the Faith.

In 2013, Rainn Wilson co-founded Lide Haiti. The charity helps young girls in the rural areas of Haiti with their education. They currently work with over 500 girls.