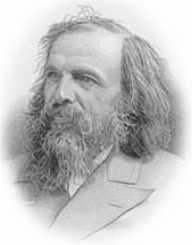 Dmitri Ivanovich Mendeleev was born 8th February 1834, to Ivan Mendeleev and Maria Mendeleeva. He was born in Verkhnie Aremzyani, Tobolsk Governorate, in the Russian Empire.

Mendeleev was the youngest of 17 children. He started studying at the Gymnasium in Tobolsk at the age of 13. After his father passed away, Mendeleev’s mother travelled around Russia trying to find an educational institution for her son.

The family relocated to Saint Petersburg, and Mendeleev started his higher education at the Main Pedagogical Institute in 1850. After he graduated, Mendeleev contracted tuberculosis, and in 1855 he moved to the coast of the Black Sea.

In 1857, Dmitri Mendeleev joined the Simferopol Gymnasium No. 1 as a science master. He returned to Saint Petersburg later that year, fully recovered from his illness.

From 1859 to 1861, Mendeleev worked on the capillarity of liquids, as well as the spectroscope. He published a textbook, Organic Chemistry in late 1861, and won the Demidov Prize of the Petersburg Academy of Sciences.

In 1863, 62 elements were recognized. In 1864, John Newlands postulated a Law of Octaves, recognizing that there were many pairs of similar elements, but they differed by a multiple of eight. He classified the elements by their atomic weight. His theory was ridiculed by his peers. Another scientist, Lothar Meyer, published a paper in 1864, where he described 28 elements and classified them by their valence.

In 1867, Dmitri Mendeleev wrote his textbook called Principles of Chemistry. It was a two-volume set and was published in 1868 and 1870. While he was writing his book, he made his discovery of the periodic table. As he was classifying the elements according to their chemical properties, he noticed patterns emerging. He later said he saw the complete periodic table in a dream and as soon as he woke, he wrote it all down.

By following his pattern as he added more elements, Mendeleev developed the extended version of the periodic table. Mendeleev made his formal presentation to the Russian Chemical Society in 1869. The presentation was titled, The Dependence between the Properties of the Atomic Weights of the Elements. He used both atomic weight and valence to describe the elements.

Mendeleev published his periodic table in a Russian journal. Some months later, Meyer published an almost identical table in a German journal. He suggested there would be more elements to come, and he said there would be another row to add to the table. Although some were disbelieving, in 1875 and 1886, gallium and germanium were discovered and added, fitting into the missing places on the table as if they had always been there.

In 1890, Mendeleev resigned from the university. He was elected a Foreign Member of the Royal Society in 1892. In 1893, he was appointed as director of the Bureau of Weights and Measures. He held this position until he died. He helped to establish the first oil refinery in Russia, and he studied the composition of petroleum, recognizing its importance in relation to petrochemicals.

Dmitri Mendeleev was recognized as one of the most important contributors to chemistry. He was one of the founders of the Russian Chemical Society in 1869. He was also credited for the metric system being introduced into the Russian Empire.

Among his awards and honors, Dmitri Mendeleev has the following:

1882:   Awarded the Davy Medal by the Royal Society of London

1905:   Awarded the Copley Medal by the Royal Society of London

In 1862, Dmitri Mendeleev married Feozva Nikitichna Leshcheva. The couple had two children, a son, and a daughter. The couple divorced in 1882.

In 1882, he married Anna Ivanovna Popova, and they had a son, a daughter, and twins.

Mendeleev died in 1907 from influenza.

Dmitri Mendeleev is known today as the “Father of the Periodic Table.” He has also had buildings named after him, as well as newer elements and minerals.