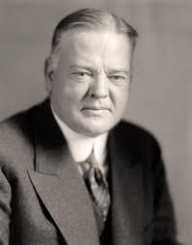 Herbert Hoover was the 31st President of the United States. He served from 1929 to 1933 as a republican President and was known for his humanitarian efforts. He was mainly known for providing relief to a lot of European victims of the World War 1. He was also known by all for his mishandling of the great depression.

Herbert Hoover was born on the 10th of August 1874 in West Branch, Iowa. He happened to be the first President who was born in the state as well as the West of the Mississipi River. He lived in his hometown for nine years before leaving there for another place. His father happens to be Jesse Hoover who was a blacksmith as well as a farm implement store owner.

When Herbert was six years, his father died of heart attack. His mother, Huldah Minthorn Hoover, passed away after developing pneumonia. Thus, Herbert became an orphan with his older brother, Theodore and little sister, Mary as a family. After the death of his parents, fellow Quakers, like his parents, were appointed as the guardians for his siblings and him.

Herbert Hoover, however, ended up with one of his uncle, Dr. John Minthorn in Oregon. Dr. John Minthorn was a physician and a businessman who received a good education at the Minthorn household. He developed good business ethics which he inculcated into the young Herbert.

The young Herbert Hoover was a sensitive introvert and shy person with some developed suspicious characteristics. These were thought to have developed in reaction to his parent's death at a very tender age. He attended High School as an average student in all subject except Mathematics.

Being a determined fellow, Herbert Hoover went to the Stanford University in 1891 and graduated with a degree in geology in 1895. However, while he was in college, he worked to fend for himself. He also participated in a lot of extracurricular activities and had a considerably strong entrepreneurial skill.

As a student, Herbert Hoover usually worked as a student assistant on geological survey teams in California, Nevada, and Arkansas. However, after his graduation, he found work laboring seventy hours per week at a gold mine around Nevada City pushing ore carts every day. Very soon, he became fortunate and became an engineer that inspected and evaluated mines for potential purchase. He then moved out to Australia to become an employee of Bewick, Moreing & Co. in 1897.

Herbert was liked by them because his training and experience were in line with the company’s objectives. He, however, worked in the Big Bell, Cue, Gwalia, Menzies and Coolgardie mines. In 1899, he moved to China to work with the Chinese Bureau of Mines as Chief engineer as well as a general Manager for the Chinese Engineering and Mining Corporation.

Herbert Hoover worked hard as a mining engineer and became very successful. However, in 1908, he left his place of work to start as an independent mining consultant. This consultancy business was successful and made him travel around the world. Having offices in San Francisco, London, New York etc. As at 1914, he had become a wealthy person with an estimated fortune of $ 4 million.

When the World War I broke out, Herbert Hoover was involved in the relief program leading over 500 volunteers in distributing food and necessities. He also helped organize the return of a lot of Americans from Europe. Soon, he became the Chairman of the Commission for Relief in Belgium. He also worked with the leader of some relief commission to help feed the Belgians during the severe period crisis. In 1917, he was appointed by to head the U.S food administration. He, however, did not stop his food relief work after the world war ended.

In 1921, Herbert Hoover was deemed fit as the United Secretary of Commerce and retained this position till 1927. In 1927, the President at that time, Calvin Coolidge announced his unwillingness to seek a second term. As a result of this, Herbert was nominated as the Republican candidate in the 1928 Presidential election. He assumed the office of the President on March 4, 1929, at the expense of Alfred Smith. He was known as a progressive president with a lot of ambitious plans which was thwarted by an economy crisis, Great Depression.

Herbert, however, failed to stabilize the economy. In 1932, during the Presidential election, he lost to Franklin Roosevelt who promised a quick recovery from the economy crisis. However, they both had a strained relationship in which Herbert used his books as equipment of attack. These books were “The Challenge to Liberty” and “Addresses Upon the American Road”.

Herbert Hoover is always and best remembered for his work as a humanitarian during and after the world war I. The victims, the poor and others much respected him for his work especially as the head of the Commission for Relief in Belgium. He also saved millions of lives that would have been forgotten.

Herbert Hoover married Lou Henry in 1899. She died in 1944. The couple had two sons, Herbert, Jr and Allan Henry. He died on the 20th of October 1964 at age 90. He died after suffering from excessive internal bleeding.