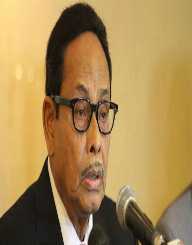 Hussain Muhammad Ershad was born on February 1st, 1930. He is a famed Bangladesh politician mainly for being the 10th president of the nation. He took power as the military head following the coup that opposed President Abdus Sattar on April 24th, 1982. After taking command of the nation, he served until 1990. He, however, resigned from office following a revolution that was commanded by Sheikh Hasina and Khaleda Zia. During his tenure, he fought for devolution reforms, expansion of highways and privatization of industries that were nationalized. He is also credited with having founded the SAARC.

Hussain Muhammad Ershad was born on February 1st, in 1930. His birthplace was in Dinhata in British India. Following the nation’s partition which occurred in 1947, his parents had to migrate to East Pakistan.

Later, Hussain enrolled for his college studies at the University of Dhaka where he graduated in 1950. Two years later, he joined the Pakistan Army. This was after he had gone through training at the Officers Training School Kohat.

During the Bangladesh Liberation War, Ershad along with other soldiers was confined as prisoners of war. However, in 1973, they returned to their new Bangladesh nation that was now by the Simla Agreement. This was an agreement between Indira Gandhi, from India and Zulfikar Ali Bhutto from Pakistan.

Upon his return, Sheikh Mujibur Rahman, the first president of Bangladesh, appointed him to serve as the Adjutant General in the Army. During this period, the nation went through numerous instabilities that were as a result of the country’s diverse cultures. Later on, Ershad was given the opportunity to study at the National Defence University where he would learn more about advanced military courses.

In August 1975, Sheikh Mujibur Rahman was murdered. The arrest of General Ziaur Rahman followed this. Nonetheless, he was restored to power in November after a successful coup led by Lt. Colonel Abu Taher. On November 7th, 1975, Abu Sadat Mohammad Sayem was sworn in as the president. During the same year, Ershad rose to his military ranks after General Ziaur Rahman appointed him to serve as the Deputy Chief of Army Staff. After some time, Ziaur Rahman took over as the president of Bangladesh. Again, he went ahead and promoted Ershad to become a Lieutenant General.

With time, Ziaur Rahman was murdered on May 30th, 1981. Ershad showed his loyalty to the government in spite of this. Accordingly, he tried his best in bringing an end to the coup attempt led by General Abul Manzoor. In 1982, Abdus Sattar won the elections hence making him the new president of Bangladesh.

In March 24th, the same year, Ershad rose to power following the bloodless coup. This made him the Chief Martial Law Administrator – CMLA. Abdus Sattar was by this means replaced by A. F. M. Ahsanuddin Chowdhury. In late 1983, Ershad assumed office as the president of Bangladesh.

During his term in office, Ershad showed support for land reforms such as the Land Reforms Ordinance of 1984. He also intended to divest the government as a move that would turn the nation away from socialism. Additionally, he played a critical part in the founding of the South Asian Association for Regional Cooperation – SAARC. This occurred in 1985.

Hussain Muhammad Ershad is a husband to Rowshan Ershad. She has served as the Member of Parliament for three times. The couple has a son called Shad Ershad. The media has, however, shed some light on Ershad and his extra-marital affairs. He was suspected of having an affair with Zeenat Mosharraf. He has also been wedded to Bidisha, but this relationship ended in divorce.